RENTON, Wash. – As part of the Seattle Seahawks' ongoing sustainability efforts, Delta Air Lines, the Official Airline of the Seahawks, has offset carbon emissions from the miles the Seahawks traveled during the 2017 season by purchasing 1,080 carbon credits from Cedar Grove Composting. 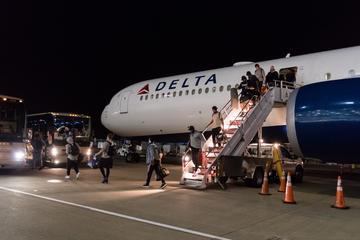 The Seahawks traveled approximately 25,688 miles for road games during the 2017 regular season on Delta charter flights, which ranks sixth in the NFL. Delta's carbon offset program, which launched in 2007, was the first offered by a U.S. carrier to allow travelers to offset travel emissions by investing in environmentally-friendly projects around the world.

"Being a good steward of the environment in the communities we serve is a core value of Delta's and is especially important to our Pacific Northwest customers," said Tony Gonchar, Delta's Vice President – Seattle. "We are proud to deliver on this commitment through our carbon offsets program and to bring our commitment to sustainability together with our great partners at the Seahawks."

The Seahawks divert approximately 16.4 tons of food waste from landfills per home game at CenturyLink Field, and that material goes to Cedar Grove Composting to be produced into compost. By diverting food waste materials from landfills, no methane gas is generated and is instead converted into nutrient-rich soil to be used across the region in school gardens, stormwater management projects and more. In October 2017, the Seahawks and First & Goal Hospitality (FGH) announced a partnership with Cedar Grove Composting and Sound Sustainable Farms to grow a custom menu of organic vegetables in compost to be served on gameday at the stadium.

CenturyLink Field continues to be one of the most environmentally-friendly and sustainable sports and entertainment facilities in the world. Earlier this month, CenturyLink Field earned a "WasteWise" award from the Environmental Protection Agency for its efforts to reduce waste and save resources.

Sustainability efforts at CenturyLink Field include:

​In 2015, Delta and the Seahawks celebrated the extension of their partnership and Delta's status as Official Airline of the Seattle Seahawks. Delta provides charter service for the team to and from each road game. Delta is also represented at CenturyLink Field with a wraparound entitlement space and the Delta Sky360 Club, which spans the entire Club Level at CenturyLink Field. The airline also supports the team's five-state, 48-station Delta Air Lines Radio Network.

Delta is the only airline to cap greenhouse gas emissions at 2012 levels by purchasing carbon offsets – more than 2.5 million in 2017 alone, and more than $8 million-worth since it started the voluntary effort. The Seahawks program builds on the airline's efforts to continue the carbon-neutral growth it has maintained since 2012 and builds on its industry-leading program that encourages customers to use the carbon calculator at delta.com/co2 to estimate their carbon emissions associated with trips and invest in carbon offset projects of their choice.

The Seattle Seahawks joined the National Football League (NFL) in 1976 as an expansion team. The Seahawks have won 10 division titles and three conference championships. They are the only team to have played in both the American Football Conference (AFC) and the National Football Conference (NFC) championship games. They have appeared in three Super Bowls, (Super Bowl XL, Super Bowl XLVIII and Super Bowl XLIX). The Seahawks defeated the Denver Broncos, 43-8, in Super Bowl XLVIII to win their first title. The team plays at CenturyLink Field in downtown Seattle and is owned by local businessman, investor, and philanthropist Paul Allen. ​