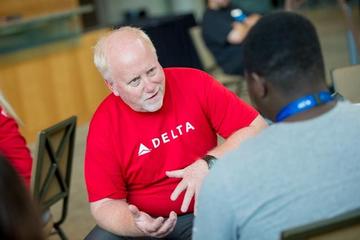 This week, Seattle-based Delta employees volunteered their time at the YMCA of Greater Seattle’s “Level Up!” workshop, a two-day exploration of life skills for 200 young adults ages 17-25. The workshop aims to build successful young leaders and empower them to “Crush Adulthood.”

Delta, in partnership with the Seattle Seahawks, hosted the sessions at Benaroya Hall, home of the Seattle Symphony. Keynotes and workshops were led by professionals across a variety of sectors, including business, banking, technology, law, non-profit and human resources.

John Caldwell, Delta’s Vice President – Seattle, spoke to the young adults in attendance about his own career path and his role as a leader at Delta. He also spent time answering questions about interviewing for jobs and the qualities Delta looks for in the hiring process.

“Find something you love to do, and you won’t work a day in your life,” John told the group. “Focus on your strengths.”

Among the Delta volunteers was Kelly Bishop, a tower operator at Seattle-Tacoma International Airport. “It’s inspiring to be part of such a great team at Delta that is committed to giving back to the community and in this instance, inspiring the next generation of the work force,” Kelly said.

Tim Steele, Delta’s general manager of Line Maintenance for the West Region, said he enjoyed connecting one-on-one with attendees in the breakout sessions. “It truly makes me feel engrained in this community when I can give back and help empower the youth,” Tim said.

Seahawks players were also in attendance along with Chuck Arnold, Chief Operating Officer of the Seattle Seahawks. 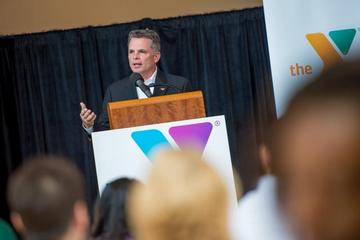 Delta has been a partner of the YMCA of Greater Seattle since 2014 and supports the organization’s Global Teens and Youth and Government programs, through which teens learn how to be a global citizen by participating in cultural competency training, service learning, leadership development and cross-cultural exchanges. Delta's Community Engagement team supports the YMCA in its hubs and focus markets in the US and Latin America as part of its Education pillar.

The YMCA of Greater Seattle serves 10,000 young people and their families each year through holistic social services including housing, education, employment, mental health and violence prevention programs. This conference is an annual event that takes place before the school year begins to prepare young people for the year ahead, and for their transition into adulthood. Delta is a proud partner of the YMCA.