SkyTeam Announces Walter Cho, Chairman and CEO of Korean Air, as Chair of its Alliance Board 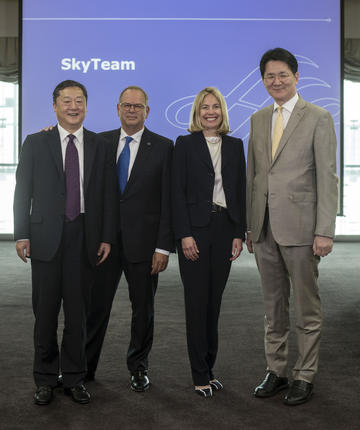 SkyTeam, the global airline alliance co-founded by Delta, has announced Walter Cho, Chairman and CEO of Korean Air, as the new chairperson of its alliance board. The appointment was endorsed this week at a meeting of the SkyTeam Alliance Board, which is composed of the CEOs of the 19 member airlines and oversees SkyTeam's global strategy.

​As a founding member, Korean Air​ has been instrumental in shaping SkyTeam over the last 20 years. Walter Cho will now play an active role, alongside the other members, as SkyTeam grows from an established network to a digitally connected, customer-centric alliance.

SkyTeam has also introduced an executive board to its governance structure. Earlier this month, Dong Bo, Chief Marketing Officer, China Eastern Airlines was appointed the chairperson of this board.

Created to support SkyTeam's focus on customer experience enabled by technology, the executive board is made up of senior business leaders from each of the member airlines who will be actively involved in implementing the alliance's strategy.

"SkyTeam is entering the next generation of its life, these two appointments reflect our members' commitment and broader engagement in creating the leading alliance of the future, with a significant focus on digitally connecting airlines to create an effortless and seamless customer experience, enabled by proprietary technology," said Kristin Colvile, SkyTeam's CEO and Managing Director.

Effective from today, Walter Cho will replace the chairperson of the alliance board, Michael Wisbrun, who has held the position for more than three years.

"I would also like to thank Michael Wisbrun for his eight years leading SkyTeam, first as its CEO and then as chairperson. Over his tenure, he has overseen a strategic shift as SkyTeam moved from a network focus to an alliance with the customers' experience and technology at its core."

Photo Caption: Dong Bo, Michael Wisbrun, Kristin Colvile and Walter Cho together after the meeting of SkyTeam Alliance Board in Seoul.