When traveling during the winter holidays, Delta’s customers have one thing in mind – getting home to their friends and families – and Delta employees ensure that’s exactly what happens, no matter the weather.

“Freezing rain or drizzle is extremely necessary to remove and can take a long time to do so,” Hart explained. Unlike snow, which can be swept or brushed away, ice is more strident and time consuming to remove from planes and runways. When icy conditions exceed the team’s ability to conduct operations, it can result it delays or even cancellations. 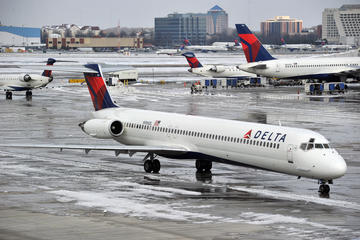 Also debilitating to the operation are long cold snaps. During the brutal cold, employees on the ramp have to wear multiple layers of clothing, which can impede body movement, and in extreme conditions, can only be outside for brief periods of time.

“Not only is it difficult for employees to load and unload in cold conditions, but it’s also hard on the plane,” Hart said. “One of our biggest challenges is just to ensure the plane doesn’t freeze. Airplanes fly at below freezing all the time, but that’s when it’s in the air and the engine is warm from the running engine warming the cabin and cargo hold.”

Pricco echoed that concern. When water systems freeze on an aircraft, it can result in aircraft damage or other mechanical issues, he said. This past year, Airport Customer Service took measures to reduce that risk through training and collaboration with Flight Operations and TechOps, as well as some procedural changes. As a result, the system saved around $92 million compared to last winter in weather related costs.

Getting ready for winter

“We’re in constant communications with operations and the airport authority to ensure our pilots and dispatchers have the best information,” Hart said.

During the days before a storm, the station ensures that it has sufficient staffing and levels of deicing fluid, as well as chains on tractors and trucks. Brooms and shovels are distributed at the top and bottoms of gates to quickly remove nuisance snow.

In Detroit, preparation for the winter is a year-round practice, from maintaining the deicing facilities and trucks, to planning around airfield safety and aircraft recovery.

“There’s not one month that goes by where the station is not addressing winter,” Pricco said. “All the planning and maintenance needs have to be completed by October at the latest because most years we start deicing in September and have snow falling through April.” 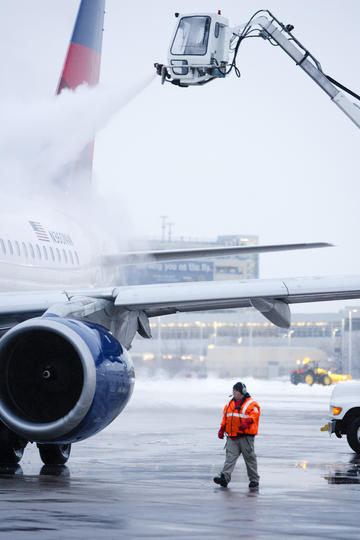 So by the time winter weather arrives, the station is equipped to deal with whatever Mother Nature chooses to send its way.

One weekend in January 2013, Detroit received more than a foot of snow, sending temperatures into the frigid single digits and 30 degrees below zero with wind chill.

“The facility started to have pipes burst, water cabinets freezing, and people couldn’t work outside for more than a few minutes because of the severe wind chill,” Pricco said. “On top of that, it became difficult to fuel aircraft. All of this had a snowball effect, and we had a difficult time operating our flight schedule.”

Thanks to careful planning and execution, the team quickly implemented its contingency plan and tactically placed ramp controllers to various locations in the airport. In the end, the station was able to safely operate the flight schedule planned originally.

At the end of the day, Pricco and Hart both emphasized preparation as the key to managing the colder months.

“Winter brings a whole different dynamic to the operation compared to other seasons,” Pricco said. “It’s a full-scale coordinated effort to deal with winter weather in addition to running the day-to-day airline operation.”