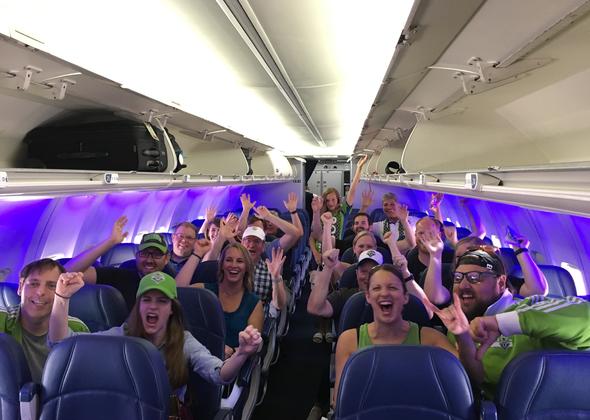 After signing one-day contracts with Seattle Sounders FC earlier in the week, the winners from Delta’s “Join the XI” season-long campaign joined the team on their trip to Los Angeles for a once-in-a-lifetime experience.

The “Join the XI” fan engagement initiative launched earlier this year to find Sounders FC’s 11 biggest fans, the Fan Starting XI, and to give them full access to the team. Throughout the season, fans had the ability to nominate themselves or their friends and family for various Sounders FC superlatives through a dedicated online landing page. The winners were selected by a panel of Sounders FC staff, program ambassadors, and Delta.

The 11 positions that comprised the Fan Starting XI were:

At an official Sounders FC press conference at The NINETY in Seattle, the Fan Starting XI was announced and welcomed to the squad by three Delta ambassadors: head coach Brian Schmetzer, midfielder Cristian Roldan, and goalkeeper Stefan Frei. The new team members received custom kits as well as the opportunity to fly on the team plane with Sounders FC for their match against the Los Angeles Galaxy on last Saturday.

Each winner received hotel accommodations in the team hotel and game tickets for themselves and a guest. Prior to the match, the Fan Starting XI was greeted by Coach Brian Schmetzer during the team dinner on Friday night. They then met with Garth Lagerwey, Sounders FC General Manager & President of Soccer, for a special game-day strategy brunch. Following their strategy session, the Fan Starting XI traveled to StubHub Center for a behind-the-scenes tour of the stadium, dinner in the American Express Club, pre-game sideline access and a post-game photo on the field after an incredible weekend filled with one-of-a-kind experiences and access as a member of the squad for the weekend. Sounders FC and Fan Starting XI members flew back to Seattle together, capping an unforgettable week.

Delta and Sounders FC extended their partnership in 2015. “Join the XI” is an extension of the airline's “You Can't Stop Seattle” brand campaign, which reveres Seattleites for their ideas and ambition and celebrates the momentum of the city while telling the story of how Delta helps fuel Seattle's pursuits. It celebrates Delta's relationships with the city's beloved, local teams — including Sounders FC — as well as its support of community organizations close to the hearts of Delta’s people. You Can't Stop Seattle represents Delta's significant investments in Seattle, which have driven changes across the competitive landscape — from product enhancements, to facility improvements, to financial benefits and community investment.