After learning a customer had just bid farewell to his family to deploy overseas, the flight attendants of Delta flight 797 from Columbia, S.C. jumped at the opportunity to lift his spirits.

Flight Attendant Melynda Wright was greeting boarding passengers when the line halted and she found herself standing next to a gentleman.

“I asked if he was going anywhere fun, and he replied, ‘No, not really,’” said Melynda. “He told me he was deploying to Kuwait for a year and had just said goodbye to his wife and baby. He was on the verge of tears.”

Melynda was stunned. “I told him I was so sorry. He went to take his seat, but I couldn’t shake it. I wanted to make him feel better.”

She approached flight leader Karen Silva with an idea to write a thank you card. 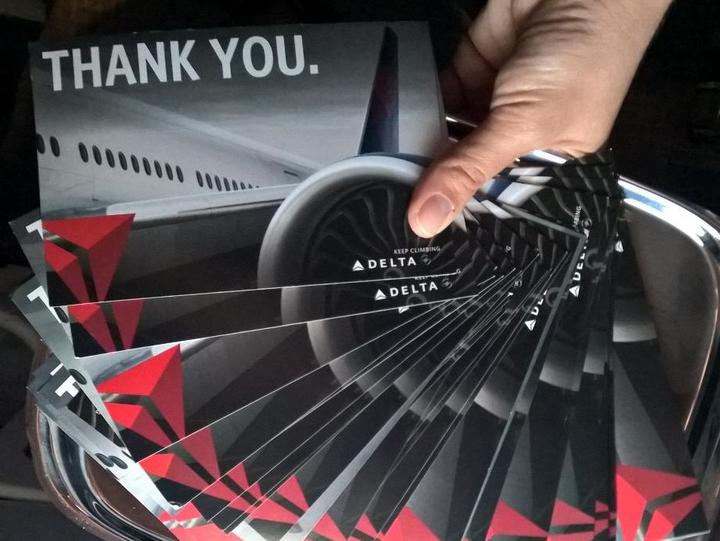 “I thought it was a great idea,” said Karen. “I happened to have a whole stack of Delta-branded thank you cards, so I suggested we see if others wanted to participate too.”

They combined enough for the entire plane to pen one and before passing them out, advised the pilots – both of whom had military backgrounds – for recognition over the announcements for all on board the Boeing 717 to hear.

During the 41 minute flight to the soldier’s connection in Atlanta, they quickly weaved through the rows down the aisle. “We asked if they would fill out a card – but you absolutely don’t have to – but wanted to give everyone the opportunity to partake. Just about every person on the plane happily replied, ‘Absolutely!’” said Melynda.

They collected more than 100 cards from passengers, including a special note from a woman in first class whose husband fought in WWII and several others from customers with family members in the armed services, like fellow flight attendant Arthea Murphy.

“It was truly a great feeling to do this for him, especially being the mother of a young serviceman who was just re-commissioned and is on deployment,” said Arthea.

After tying the cards full of kind words and well wishes with a ribbon and Delta Biscoff cookies, the crew made an announcement thanking him for his service and sacrifice and presented the large stack of cards for him to read on his flight overseas.

“I told him that we, along with the other passengers on board, wanted to show our appreciation,” Melynda said. They also asked that he share them with his fellow comrades once he arrived.

“He was so grateful and it was a lot of fun. We were really happy to make him smile.”

“This is a heartwarming example of Delta people feeling empowered to go above and beyond for our customers,” said Allison Ausband, S.V.P. — In-Flight Service. “We connect thousands of people each day to important life events around the world, and it’s up to us to make sure they’re taken care of along the way. These flight attendants showed an overwhelming amount of compassion for this serviceman and we’re proud to have made a positive impact on his difficult journey.”