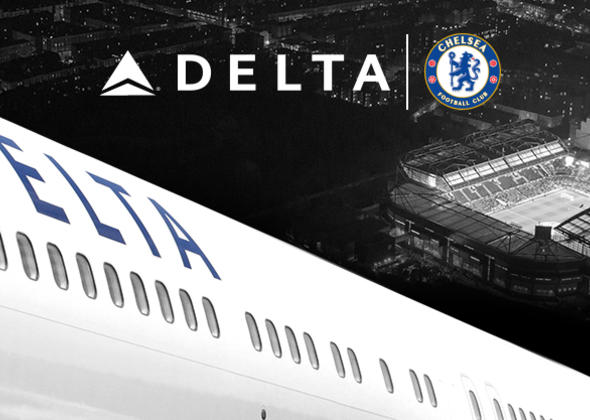 LONDON - Delta will be Chelsea Football Club’s official airline sponsor for another three years. The announcement was made today.

Delta and Chelsea FC, the English Premier League and Capital One Cup champions, first joined forces in 2012 and since then have worked together to bring the airline’s 170 million annual passengers closer to the club. Chelsea players have joined Delta customers and employees in numerous events around the world showcasing Delta’s products and services and shared global scope.

“Chelsea Football Club and Delta are both winning brands and since the partnership began three years ago, both have gone from strength to strength,” said Perry Cantarutti, Delta's Senior Vice President – Europe, Middle East and Africa. “We look forward to another three great years and to working with the club in promoting their activities in the U.S.”

Delta is the exclusively designated “Official Airline Partner of Chelsea FC” and the agreement gives Delta LED exposure at each home game and on the Chelsea FC website. The Delta logo will also be included on media backboards for interviews conducted at Chelsea’s stadium around Premier League home matches.  The Delta 360˚ Lounge will also remain at Stamford Bridge.

The airline will also be welcoming the Chelsea team as they tour the U.S. this summer, playing matches in New Jersey, Charlotte and Washington, D.C.

Delta, alongside partner Virgin Atlantic Airways, operates up to 39 flights a day from the U.K. to North America.