Seattle Sounders FC fought its way into the finals for the first time in club history and will face Toronto FC at BMO Field in Toronto on Saturday for the 2016 Major League Soccer Cup championship. 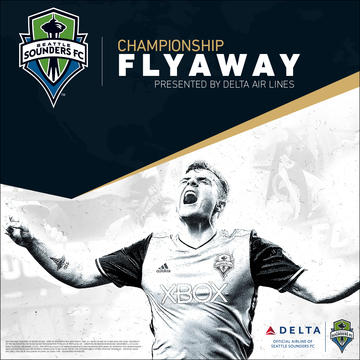 As the Official Airline of Sounders FC, Delta has partnered with the team all season long but stepped up its support at the airport this week as excitement builds for Saturday’s game.

From airport décor to the boarding process, Delta pulled out all the stops to cheer on the team. Delta gates and check-in counters were decorated with white and green balloon columns and celebratory banners, and a good luck message was displayed on the Delta Sky Club sign and in the baggage claim area. Fans flying on Delta out of Sea-Tac this week were rewarded with priority boarding for showing their support by wearing Sounders FC gear, and a custom Snapchat filter with a good luck message from Delta was created for fans to add over their photos or videos. 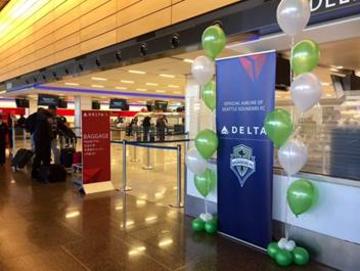 Delta also hosted a “Championship Flyaway Contest” this week that received more than 8,000 entries in 24 hours. The contest is giving 11 fans and their guests a trip to the MLS Cup Finals. The airline will also hand out Sounders FC-themed doughnuts from Top Pot, a popular local bakery, to customers flying out of certain Delta gates on Friday and Saturday.

The game is expected to draw a crowd of around 36,000 fans, and tickets sold out in three minutes.

Delta and Sounders FC celebrated the extension of their partnership in 2015. The partnership supports the airline’s You Can’t Stop Seattle brand campaign, which reveres Seattleites for their ideas and ambition and celebrates the growth and momentum of the city while telling the story of how Delta helps fuel Seattle’s pursuits. It celebrates Delta’s relationships with the city’s beloved, local teams – including Sounders FC – as well as its support of community organizations close to the hearts of Delta people. You Can’t Stop Seattle represents Delta’s significant investments in Seattle, which have driven changes across the competitive landscape – from product enhancements, to facility improvements, to financial benefits and community investment. 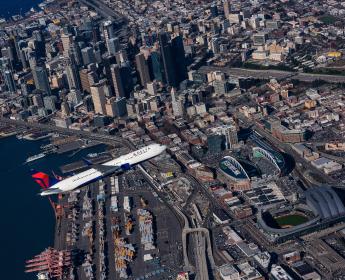