And as memorable as the flight from New York to Mexico City was, it was truly just the beginning.

“Today is just our kick off – it’s the kick-off for a month-long focus on fundraising and education,” said Sandy Gordon, Vice President–In-Flight Service Field Operations. 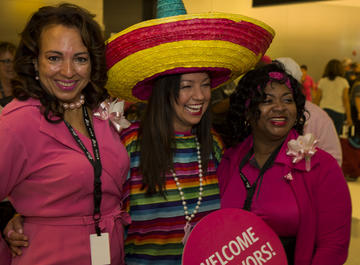 This year marked Delta’s 11th annual survivor flight, which carried more than 140 employee breast cancer survivors on board Delta’s newly painted pink plane on the flight’s first international route.
The employee survivors, along with Delta leaders and BCRF executives, were celebrated and honored during a gatehouse event in New York and a hangar event in Mexico. Colleagues from Delta’s partner airline Aeroméxico also took part, showcasing the international scope of the fight against breast cancer.

As part of this year’s initiative, Delta also hosted its second “Unsung Hero” social media contest. The airline encouraged customers who are survivors or currently battling breast cancer to share the story of the person who has provided countless hours of support during their journey. As a result, five customers and their unsung heroes were chosen to attend this year’s flight.

“Being with the other survivors has been pretty inspirational and seeing everyone’s stories has been helpful to know that we’re not alone,” Michelle, a Delta customer, said of herself and her husband Michael.

To further raise awareness and support for breast cancer research, Delta employees will wear pink uniforms and sell pink products, including pink lemonade and pink headsets, on board and in Delta Sky Clubs throughout the month of October. Proceeds from the airline's pink products will benefit BCRF.

Related Topics
Do not show on front page
Off