Today, the Trump administration announced an agreement with the United Arab Emirates that will protect American airline jobs and help enforce U.S. trade deals against unfair foreign business practices. Under the agreement, the UAE will make a series of changes in the way it finances and operates its state-owned enterprises, Emirates and Etihad Airways, including an end to government subsidies.

For the first time ever, the UAE acknowledged that government subsidies harm competition, a significant concession after years of denials.

As part of the agreement, the UAE has committed to applying commercial terms to all transactions and to operating in a transparent manner by using internationally agreed upon accounting and auditing standards, both of which will prevent subsidization. Additionally, the UAE has committed to a freeze on any additional "fifth freedom" passenger flights to the United States, which are flights coming from outside the UAE that carry passengers to the U.S. The agreement will also make sure that Emirates and Etihad Airways pay their share to operate out of their international airports. Until now, improvements to Emirates and Etihad Airways' airport terminals in Abu Dhabi and Dubai have been subsidized by the UAE government.

In January, the Trump administration announced a similar successful agreement to address illegal subsidies from the State of Qatar to its government-owned airline, Qatar Airways.

"Today marks a truly significant moment in a years-long pursuit of a level playing field for Delta and other U.S. carriers," said Delta CEO Ed Bastian. "We thank the Trump administration for addressing the harmful trade violations by the UAE and Qatar and for enforcing U.S trade agreements. We are grateful to our supporters in Congress, our partners throughout the U.S. aviation industry and the tens of thousands of Delta people who made their voices heard in an effort to protect millions of American jobs and end these unfair practices."

Delta Chief Legal Officer Peter Carter added, "For far too long, state-owned airlines in Qatar and the UAE have been able to use illegal government subsidies to compete against U.S. airlines and threaten U.S. jobs. This is a landmark step forward in the enforcement of our Open Skies agreements. We will work with the State Department and other administration officials to ensure these commitments are upheld."

American Airlines Chairman and CEO Doug Parker said: “We commend the Administration for their determination to enforce our trade agreements and stand up for U.S. jobs. Our goal has always been to ensure a level playing field. American Airlines will always compete aggressively, but we believe everyone should play by the same rules. We have the utmost confidence in our 130,000 team members who take great pride in the service American Airlines provides. Today’s actions address the illegal subsidies received by Emirates and Etihad Airways and most importantly help create a level playing for American workers.”

“From the beginning, we’ve sought to level the playing field for America’s aviation industry and the millions of jobs it supports, as well as foster competition that, ultimately, benefits the American public,” said Oscar Munoz, CEO of United Airlines.  “This development signals an important step in that direction and we applaud the administration for its efforts. United Airlines will continue to work as a constructive partner in advancing a competitive environment where American aviation can thrive and consumers win.”

“The UAE’s pledge as reported by the U.S. government would represent a promising development,” said Captain Tim Canoll, President of the Air Line Pilots Association. “However, the UAE’s actions will serve as the true test of its commitment to fair competition. ALPA will closely watch how the UAE delivers on its pledge to the U.S. government.”

The Partnership for Open and Fair Skies, which Delta belongs to, intends to work closely with the Trump administration to ensure both the UAE and Qatar abide by the terms of the agreements, and that fair competition is successfully restored to the global aviation marketplace.

The agreement was announced today at a U.S. State Department event with Secretary of State Mike Pompeo and UAE Foreign Minister Sheikh Abdullah bin Zayed Al Nahyan. The Partnership for Open & Fair Skies has documented more than $25 billion in subsidies that the UAE government has provided to its state-owned airlines, violating Open Skies, violating the Open Skies agreement with the United States. The Partnership has also documented over $25 billion from Qatar to its airline, Qatar Airways. The United States has more than 120 Open Skies agreements with nations around the world, all designed to promote open and fair air travel free of government interference.

Photo caption: Delta employees lobbied members of Congress and staffers as part of the Our Future. Our Fight campaign last year. 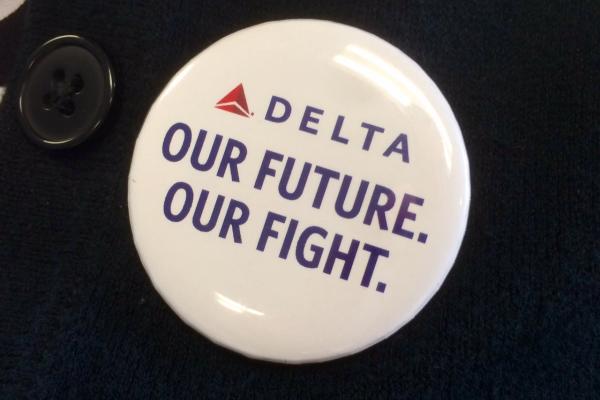 Employees in Detroit call for fair competition from Gulf carriers