10 years ago, the world was introduced to a new social media platform that let users share opinions, exchange gossip and hash out arguments… in 140 characters or less. Today, Twitter is ubiquitous, acting as a soapbox for activists, celebrities, politicians and even your next-door neighbor. 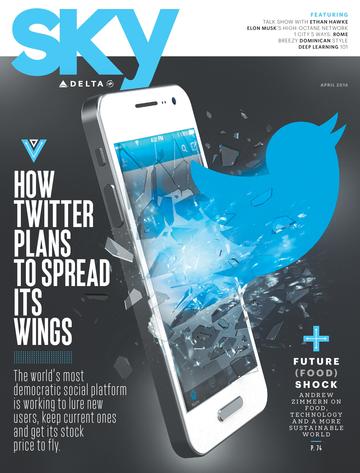 In this month’s Sky magazine, Twitter’s new executive chairman, Omid Kordestani, talked about what’s next for the world’s most democratic social media platform. “What we’re really focused on for the next 10 years is continuing this momentum and really making the service easier and more engaging and rewarding for everyone,” he said. “To do that, Twitter is taking a few big steps to reshape itself.”

Those changes include “Moments,” which provides an instant snapshot of the best stories unfolding on Twitter, a new animated GIF search and finding a way to better incorporate Periscope, the company’s separate live-streaming video platform.

Delta also recently announced changes to its own Twitter platform. This month, Delta is integrating @DeltaAssist real-time customer support into its primary @Delta Twitter handle to offer customers a seamless experience when communicating with the airline’s team of more than 40 social media specialists. And last month, Delta became one of the earliest business adopters of Twitter’s new direct message button within a tweet, something that’s essential for communicating private customer information.