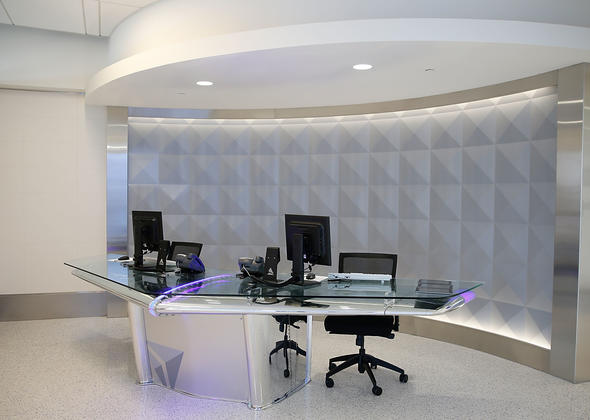 LOS ANGELES - There was plenty to see at Wednesday’s unveiling of Delta’s $229 million refurbishment of Terminal 5 at Los Angeles International Airport. Amid the hoopla was an unusual reception desk Delta is using to honor its past by incorporating it into its state-of-the-art LAX expansion.

The T5 debut created excitement among media, customers and employees, including buzz about the reception desk sitting in Delta ONE. The desk is actually the top of the DC-9 Ship 9885 horizontal stabilizer – also referred to as the back T- tail.

Ship 9885 had a long airline career and a Southern California history, befitting of its new home at LAX. Built in Long Beach by McDonnell Douglas in 1975, the DC-9 was the largest of the original DC-9 series. Delta was an original operator of the DC-9 starting in 1965.

While Delta’s Product Development and Brand Communications teams were brainstorming a concept for Delta ONE’s reception desk, the idea surfaced to fashion it out of material from a reclaimed aircraft.

The Delta team contacted MotoArt in El Segundo, Calif., just minutes away from LAX, which recycles vintage airplane parts into futuristic furniture, including beds, coffee tables, chairs and desks. MotoArt was hired to make the desk for Delta ONE.

A crew was dispatched to the Arizona desert, where the DC-9 had been resting since retirement in 2013, to dismantle the tail from the airplane and truck it directly to the studio.

“Kevin Cowart [Manager, Asset and Project Management—TechOps] is in the group that manages our stored aircraft and also handles the recycling of permanently retired aircraft,” said Jeff Coons, Manager–Customer Experience. “He was instrumental in helping us identify the airplane and ensure that the team at Marana Aerospace properly remove the tail and prepare it for transit to the MotoArt team.”

The tail was removed in March and the artistic folks at the studio did their thing.

“When I designed this piece, I wanted to truly keep the sensation of flight when you first saw it,” said Dave Hall at MotoArt Studios. “The vertical and horizontal lines on the DC-9 wing stabilizer make it look as if it’s actually taking off. We couldn’t be happier with the final outcome.”

The reception desk sits at the entry to Delta ONE and will be used daily by the Elite Services team to assist customers who are eligible to use the check-in area.

“The design and customer experience for Delta ONE is unique and high touch – and includes several elements local to Southern California,” said Jeff. “Designing and implementing this desk is an excellent way for us to celebrate Delta’s history by using components from a retired Delta aircraft. It also brings a part of that airplane home. The DC-9 production line was just a few short miles from LAX at the Long Beach Airport and was repurposed by the craftsmen at a studio less than a mile from LAX. It’s the ultimate round-trip journey for Ship 9885.”