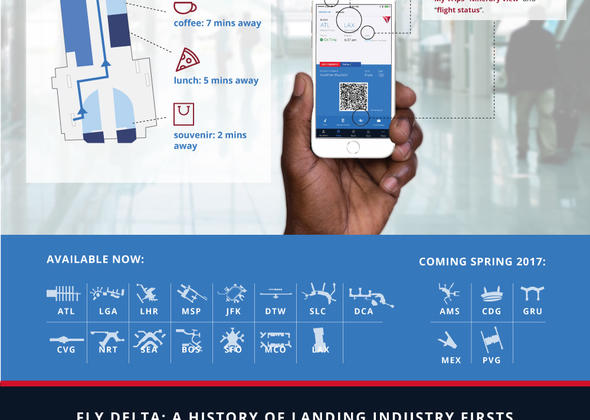 It’s 8:03 a.m. You dozed off and missed the in-flight beverage service – you had been looking forward to grabbing a Starbucks onboard.  You’re on approach to CVG, an airport you’ve only been to a few times, and wonder, “What are the chances there’s a Starbucks on the way to get my bags?” Thankfully, you updated your iPhone with the latest version of the Fly Delta app featuring airport wayfinding maps. You access it, tap on the “CVG” on your boarding pass, and up pops the CVG airport map where you search “Starbucks.” There are four – and one is near your arrival gate!

Delta on Wednesday released the latest version of its Fly Delta app, giving customers access to the industry’s most innovative airport wayfinding maps, and the ability to keep up with boarding pass and flight details, even when a reliable Wi-Fi or cellular connection isn’t available.

The wayfinding tool features interactive maps for 20 major airports – including the airline’s hubs – and guides customers with turn-by-turn walking directions to their next gate, a restaurant or even baggage claim. Delta is the only airline to give customers the ability to access airport maps on iPhone via their boarding pass by touching the departure city code, arrival city code or gate numbers, and through My Trips, Flight Status and the “More” section.

“Delta’s airport maps are another customer experience differentiator,” said Rhonda Crawford, Delta’s Vice President –  Global Distribution & Digital Strategy. “We went beyond the industry standard to fully integrate maps into the boarding pass and other parts of our app experience. We are trying to anticipate when customers may want or need to use a map and provide an easy and intuitive way to do that – whether to find a Sky Club, a gate or a cup of coffee.”

Delta worked with travel-focused tech start-up LocusLabs to develop the wayfinding map functionality that provides turn-by-turn navigation after automatically recognizing where a customer is when they input their search term. Customers can search using generic terms like “coffee” or brand names like “Starbucks” and choose from a list of options to retrieve directions.

“As a first among travel apps to ingrain location services this deeply, Delta has put the passenger’s needs first, while laying the groundwork to streamline the customer experience, improve operations, and ultimately provide a superior end-to-end travel service,” said Campbell Kennedy, CEO and Co-founder, LocusLabs.

The latest Fly Delta app for iPhone also includes 3D Touch quick actions on the home screen app icon so customers can tap the icon to reveal shortcuts to book a flight, check in or view flight status.

Offline mode is another new feature of Fly Delta 4.2 for iPhone, which increases the reliability of the app by making customer travel itinerary information – including boarding passes – available even when their device isn’t connected to the Internet.

Fly Delta 4.2 comes on the heels of Delta’s move at LAX to a temporary location as part of its larger terminal move and renovation.

“Delta has several airport infrastructure projects underway and we expect this new app functionality to play an important role in helping customers through some important transitions,” Crawford said.

Fly Delta for Android will be released spring 2017.

Fly Delta app has history of leading the industry

Delta has led the airline industry in app technology advancements, starting with the introduction of the Fly Delta app in 2010. In 2011, Delta was the first to offer cancelled or delayed flight rebooking via its app and the first to offer bag tracking for bags associated with a reservation or those with tags scanned using the app. In 2013, Delta’s design for indicating TSA Pre-check on Apple Wallet boarding passes was adopted as Apple’s standard in displaying this information for all airlines and in 2015 the Fly Delta app was the first U.S. airline to offer Apple Pay. 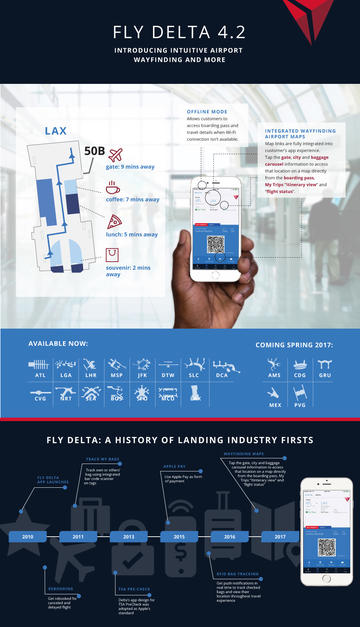