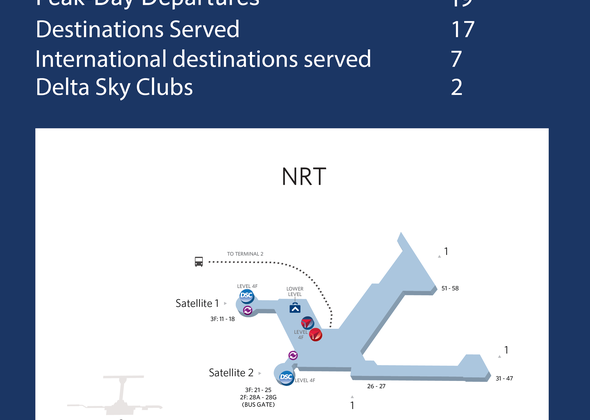 If a framework negotiated by Japanese and American governments is adopted this year, Delta could be forced, over time, to cut all seven of its direct flights between the U.S. and its hub at Tokyo’s Narita airport, a Delta executive said.

On Feb. 9, negotiations between the U.S. Transportation and State departments and the Japanese Ministry of Land, Infrastructure, Transport and Tourism will pick up where 2015 talks left off. The focus is on allowing both U.S. and Japanese airlines limited access to Tokyo’s Haneda airport, to the detriment of Delta’s Narita hub. Haneda is much closer to Tokyo than Narita, but access continues to be restricted by the government of Japan.

“A piecemeal opening of Haneda will syphon customers from Narita to Haneda, killing Narita as an international airport,” Hirst said separately. “Minnesota, Oregon, Michigan and Georgia are home to dozens of global businesses that rely on Delta’s service to deal in Asian markets. But direct access would be lost when those routes are no longer viable.”

The Detroit News business column  this week reported that the Open Skies agreement between the U.S. and Japan “(was) designed to foster competition by reducing regulatory barriers could, in fact, be used to achieve the opposite: reduce foreign competition by effectively eliminating Delta from the Tokyo market.”

Hirst spoke this week to the Metropolitan Airports Council in Minneapolis-St. Paul. The Minneapolis Star Tribune reported on the meeting and outlined the risk of the community losing its daily direct flight to Tokyo.

The number of daytime Haneda slots Japan has on the table would be enough to move virtually all 3,100 daily passengers in the current U.S. mainland-NRT market over to Haneda, but the one or two slots likely made available for Delta wouldn’t be nearly enough to move its hub operation there. Meanwhile United and American airlines would enjoy increased access to Haneda with their Japanese partners.  It will create a duopoly by two U.S. and Japanese airlines’ joint ventures, to the detriment of consumers in the market.

In 2010, the U.S. and Japan reached an Open Skies agreement designed to increase air service competition to Japan, but excluded Tokyo-Haneda airport from the open and fair competition provisions Today, access to Haneda remains extremely limited and U.S. carriers are forced by the Japanese government to largely use the less-convenient Narita airport.

Hirst said the U.S. should insist Japan fully open Haneda to U.S. carriers or continue operating the two airports at status quo, so all carriers compete fairly at Narita.

Haneda is often viewed more favorably because of its proximity to central Tokyo. In the 1970s, Haneda was restricted to domestic Japan traffic, while farther-out Narita was designated as Tokyo’s primary international airport.

“With the next round of negotiations coming in less than four weeks, Delta is fighting hard to make government officials aware of the impact their deal with Japan could have in markets that directly serve Narita, on the Narita hub and our people,” West said.