Ship 3501, Delta’s newest jet, touched down in Atlanta early Sunday morning, just after 2 a.m. following the trans-Atlantic crossing direct from Toulouse, France, where the aircraft was assembled. On board the widebody jet were a number of employees from TechOps, Fleet Strategy and Transactions, IT, Product Marketing, Flight Operations, On Board Services and others who were instrumental in delivering the A350 to the airline — many of whom have been with the project since the aircraft was first ordered in November 2014.

Despite the early morning arrival, Atlanta Airport showered the aircraft with a ceremonial water canon salute before it docked at the F Concourse.

The A350 will spend the next two and a half months preparing to enter service with Delta. Its first flight is scheduled for Oct. 30 from Detroit to Tokyo-Narita International. 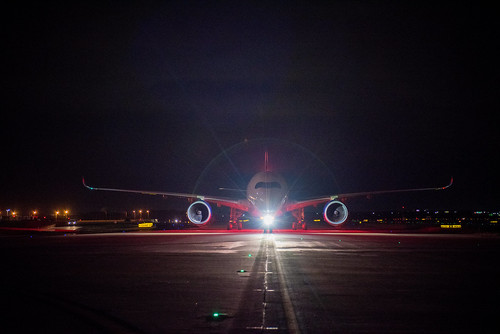