“We’re all coming from the same place. We’re all a member of this club that none of us signed up to be – and we’re showing others that the path is hard, but you too can do it,” said Toni W., Assistant Chief Pilot, in the clip.

The employee survivors, along with Delta leaders and BCRF executives, were celebrated and honored during a kickoff celebration at New York City’s John F. Kennedy International Airport and a special evening event in Los Angeles. 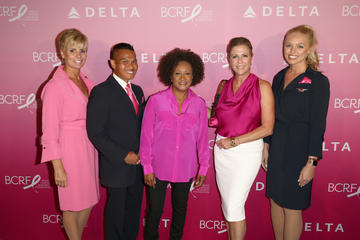 “I know when I was going through it, it was very scary and anything I could think of that would cheer me up or make me laugh just made things easier and better to get through,” said Sykes who performed for the survivors at the dinner.

The dinner also included a meet-and-greet with Dr. Sofia Merajver, one of BCRF’s world-renowned researchers. 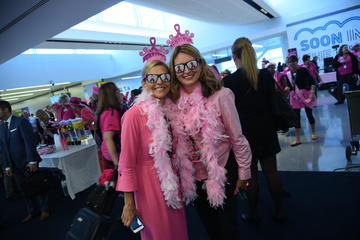 “Last year I was a crew member, and I remember looking out at these women and thinking ‘gosh this is amazing’,” said Julie A., In-Flight Service-ATL. “And then four months later I went for my yearly mammogram and I was diagnosed with Stage 1 breast cancer. I really just found a lot of strength from the women because it was a very difficult time, but I knew that if they could make it, I could make it, too.”

Since 2005, Delta employees, customers and their friends and families have raised $11 million for BCRF since 2005, including last year’s efforts of $1.75 million. The collective contributions have funded the vital work of 44 different research projects over the years in the pursuit of eradicating breast cancer.

To further raise awareness and support for breast cancer research, Delta employees will wear pink uniforms and sell pink products, including pink lemonade and pink headsets, on board and in Delta Sky Clubs throughout the month of October. Sales of the airline's pink products will benefit BCRF.