After landing in Shanghai this past April, a quick-thinking team of Delta employees sprang into action to save the life of a customer. Because of their incredible teamwork and life-saving intervention, all have been honored with Delta’s “Save the Day” award.

Kristina Dobson was traveling with her husband, Mark, on their very first trip to China to represent their Indiana hometown in a “sister city” program. Their nearly 14-hour flight from Detroit had been relatively uneventful until the deplaning process began.

“As she walked by me, she was just fine. But as she approached the front door of the 747, she suffered a stroke that completely debilitated her,” said flight attendant Bill Haworth. 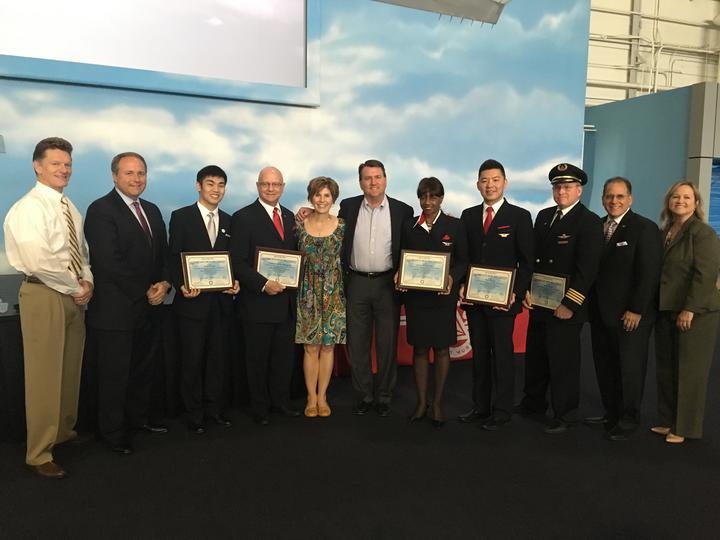 Captain John Davis and purser Bryan Wang, both of whom have medical training, quickly began emergency aid. What’s more, this flight was the last leg of Davis’ final trip as a pilot, and for Wang, the trip was his first as lead flight attendant. Flight attendant Susie McDonald assisted, keeping the victim calm and comfortable.

As the minutes ticked by, Dobson’s condition began to rapidly deteriorate. Arriving paramedics immediately rushed her and her husband to a local hospital for emergency treatment. After learning no one at the facility spoke English and a larger, international hospital was more than an hour away, Wang and gate agent Vincent Xu, both fluent Mandarin speakers, accompanied the Dobsons to the ER, essentially becoming their interpreters. Haworth also went along to assist the family with anything they may need and to help coordinate with the hospital’s medical staff.

The results of Dobson’s MRI revealed she had a blood clot in her brain. Since it had only been a few hours since the onset of the stroke, doctors recommended giving her a clot-busting drug called rtPA that would be delivered right to the site of the blockage and hopefully prevent any further brain damage. Unsure of the risks or advantages of the suggested treatment and without an international calling plan, Haworth loaned Mark his phone to call their own doctor back home. The doctor gave hospital staff the greenlight, and they quickly administered the treatment.

“Within the hour, her color was back, she was able to talk to us and had complete movement of her arms and legs,” said Haworth.

Davis, Haworth, Wang, Xu and McDonald were honored with Delta’s “Save the Day” award on Wednesday by Delta leaders from Corporate Safety, Flight Ops, In-Flight Service and Airport Customer Service.

“We don’t have a manual for everything, but we are taught to put the customer first and treat them as you would want to be treated,” said John Laughter, Senior Vice President – Corporate Safety, Security and Compliance. “I’m so proud of this team. They took care of this couple who were far from home. Their actions are a testament to Delta’s amazing culture.” 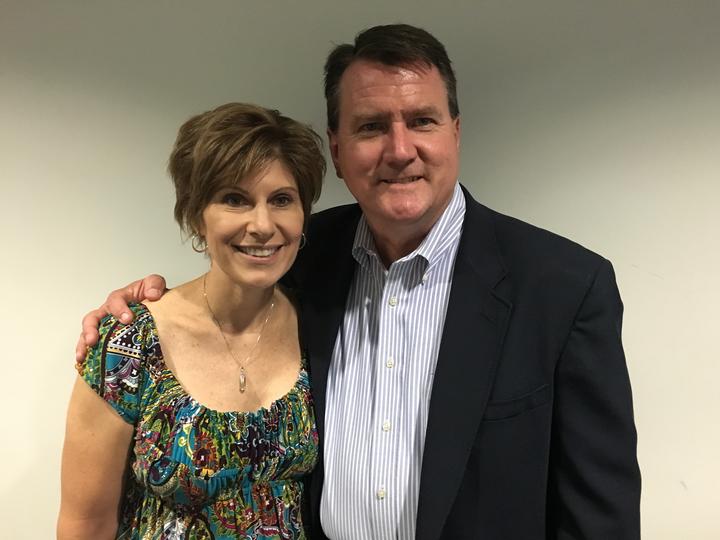 The Dobsons also made the trip from Indiana to thank the crew in person at the ceremony.

“It wasn’t just that day, they took care of us that whole week and beyond. Two weeks after the stroke, they texted us just to make sure she was doing OK,” said Mark Dobson. “She’s my best friend, and I’m very grateful for what you all have done. We’re so proud you’re receiving this award.”