More than 200 Delta and community volunteers in Silver Spring, Md., came together on Saturday to build Delta's 25th KaBOOM! playground since the launch of the KaBOOM! partnership in 2013. This playground was also the first Delta-KaBOOM! build in the Washington, D.C. area where KaBOOM! is headquartered. The new playground offers a safe and accessible place to play for more than 700 YMCA kids – mostly aged 2-5 at the YMCA Silver Spring, as well as the surrounding community. 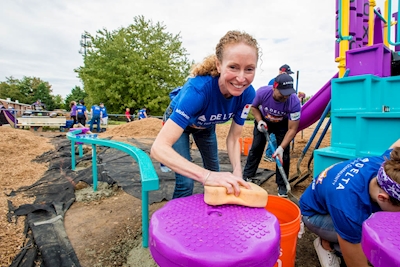 "The Silver Spring YMCA has been here for over 60 years, and we're an integral part of the community all around us. With this playground provided by Delta and KaBOOM!, we are able to tick off a box for something we have been dreaming of for over 10 years," said YMCA Silver Spring Executive Director Andrew Mason, who has been involved in the planning and design of the playground along with the parents and kids that utilize their services. "The kids are the most excited. All they ask is 'When's the playground coming?' so it will be exciting to see their faces when they see it." he added.

The playground was completed in just six hours and includes a multi-dimensional play structure with slides, a Crazy Bones bridge, tent rock wall, fire truck component and shade structures to keep students and teachers cool. In addition to the playground, volunteers built benches and painted colorful sidewalk games and a fun and colorful directional sign for the playground. Volunteers also mixed concrete by hand and moved a mountain of mulch for the play area during the project.

"Delta volunteers come together with the YMCA children and parents and KaBOOM! to build this playground that the children got to help design back on Design Day in July, and today we get to see it really brought to life in just one day," said Heather Wingate, Delta's Senior Vice President — Government Affairs.  "We are particularly excited to show the D.C. area that we do truly care to show who we really are as Delta employees and as a company." 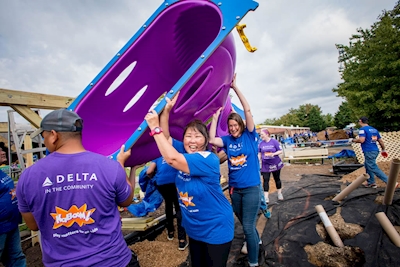 At the ribbon cutting, Delta surprised the YMCA Silver Spring with a check for $10,000. The donation will assist with long-term maintenance of the playground and support future programming at the YMCA.

Also on hand was Rep. Jaime Raskin (D-MD-8) who brought an official Certificate of Proclamation presented to the Silver Spring YMCA in recognition of their extraordinary commitment to providing children with fun and safe places to play. Congressman Raskin is a member of the Silver Spring YMCA, and his children participated in programs there when younger. 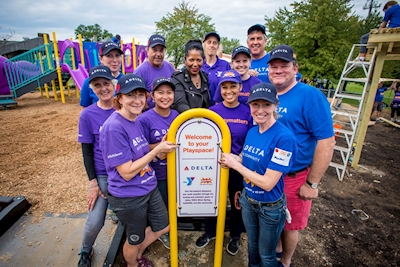 "We are thrilled to celebrate Delta's 25th KaBOOM! playground since the partnership began just 5 years ago.  It was a fantastic day building the first Delta-KaBOOM! playground in the Washington, D.C., area for the YMCA Silver Spring and a true illustration of what's possible when Delta volunteers come together with the local community to build something for future generations," said Tad Hutcheson, Delta's Managing Director — Community Engagement. "It's core to our culture at Delta to give back to the communities where we live, work and serve, and we are proud of our partnership with KaBOOM! as we continue to make a difference and provide the gift of play to thousands of children across the country."

KaBOOM! is the national non-profit dedicated to giving all kids the childhood they deserve filled with balanced and active play. This year, Delta will complete six KaBOOM! playgrounds, including those already built in Los Angeles, Miami, New York City and Salt Lake City, and one more slated for October in Atlanta.