Waiting for a flight in ATL? Learn CPR

David Morrison was sitting at his desk in the Finance department at Delta’s General Offices on Feb. 13, 2013, when with no warning signs, he went into cardiac arrest. 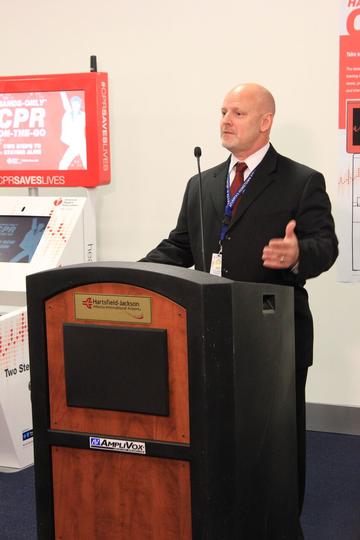 Luckily a coworker stopped by and noticed him resting on his desk. She reached out to wake him, but he fell over onto the floor.

“There were so many people involved in helping me,” Morrison said. “One of my coworkers knew CPR but had never performed it in a real life situation. He immediately started compressions.”

Colleagues ran to grab the defibrillator machine, called emergency medical services and met paramedics at the curb. Delta's Chief Financial Officer Paul Jacobson held the doors as Morrison was rushed outside to the ambulance and taken to the hospital.

Today, Morrison stood before a group of media at Atlanta’s Hartsfield-Jackson Airport sharing his story, excited to unveil life-saving technology that trains people right where they are, the American Heart Association CPR Hands-Free Kiosk.

“Only one in ten people who suffer a cardiac event outside of the hospital survive and for those that do, it's because someone was here to act quickly,” Morrison said.

Located between gate A11 and A15, the kiosk will allow airport visitors and employees a chance to learn and practice CPR. This technology was launched in Terminal C at Dallas/Fort Worth and trained 9,000 people in the first year. 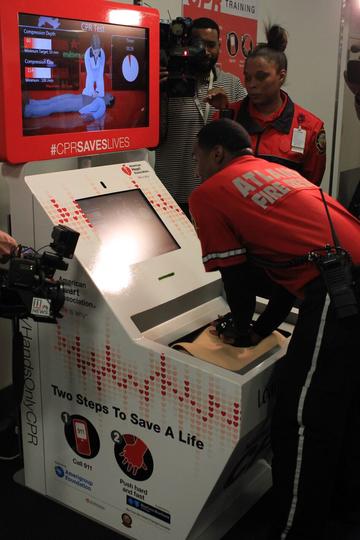 Currently, only one in 100 people in Georgia know CPR. Now available in Atlanta thanks to a partnership between the American Heart Association, Hartsfield-Jackson Atlanta International Airport, Delta, Blue Cross Blue Shield of Georgia, Amerigroup and Atlanta Fire Rescue, this tool can give people the knowledge and training to save lives.

Barbara Martin, Delta’s General Manager - Occupational Health Services, explained, “At Delta, safety is a core value and by putting this tool in the hands of our customers, they can be game changers.”

The interactive kiosk kicks off the experience with disco music driving the beat, “Ah, ha, ha, ha, stayin' alive, stayin’ alive...” A narrator then provides a brief introduction and reminds the user that if you can hum the Bee Gee’s hit, you can save a life. Next there’s a 30-second practice session and a 30-second CPR test on a plastic human torso. The kiosk scores participants on the depth and rate of their compressions.

Dr. Herman Taylor, Greater Southeast Board member of the Atlanta American Heart Association, explained what one should do if someone collapses to the ground: “Follow these two easy steps: first, call 911 and then press hard in the center of the chest and think of the song ‘Staying Alive’ to keep the beat.”