A war veteran’s family couldn’t greet his remains, so Delta people gave him a hero’s welcome

In Summary
​​​​When COVID-19 threatened to prevent the Korean War vet's family from welcoming his body to Baltimore, the Delta family stepped in.

The Delta family welcomed home Allen Berger Hope, a U.S. Marine Corps veteran of the Korean War, to Baltimore Washington International airport last week. Mr. Hope, who was 90 when he passed away, was laid to rest next to his wife, Sylvia, at a small funeral Friday.

Mr. Hope almost arrived at BWI alone due to the COVID-19 pandemic. His daughter, Albuquerque-based Michele Hope, and her husband were unable to get to Baltimore in time for his arrival Tuesday. Michele, a Southwest Airlines employee, shared her disappointment on a Facebook group. 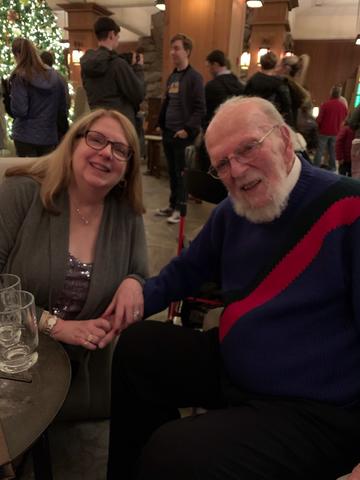 When Delta employees read the news, they quickly organized a proper ceremony for this U.S. military hero.

BWI Station Manager Dion Moncur issued an "all-call" throughout the airport and within two hours had a huge response from Delta people and other employees from the airport.

"Even though these are incredibly difficult times for our company and industry, we can't lose sight of our humanity and take every opportunity to connect with others in a meaningful way. My thanks to the many Delta employees who saw Michele's post and ensured that I received it."

Ceremonies for Mr. Hope's aircraft included a water cannon salute by airport first responders. Delta Operations Service Manager Amanda Poseley used FaceTime to contact the family planeside, where the family would have stood to receive the loved one. This gesture allowed the family to watch the ceremony from thousands of miles away – another example of how Delta cares for its people, both customers and employees.

"The ability to FaceTime and make a real connection with Michele is something I'll never forget. Michele and her family were so grateful, and I could see the pain and appreciation in her eyes as we watched the water salute and arrival," said Amanda. "The human connection is something that I think Delta and our people are phenomenal at. Even through pandemic and uncertainty, the airline community is a family, and we will always take care of each other."

Dion invited the BWI airport community to the ceremony, and Michele was blown away by the response. Every on-duty airport first responder and every on-duty Delta employee, including a staff member who came in on his day off and staff members who came in early to ensure a successful arrival, participated in the dignified transfer of Mr. Hope's remains. Delta employees and first responders were joined by employees of Southwest and American Airlines.

Southwest employees served as pallbearers, receiving the body to carry it to the hearse as a tribute to their colleague, Michele.

Connecting our world is a part of the Delta Difference, and we are thankful for connections made possible through customer engagement. Michele sharing her loss on Facebook allowed Delta employees to coordinate an act of kindness that will forever be remembered by Michele and her family.

"I'm eternally grateful to the men and women of Delta for the honor and respect shown to my father on his final flight home," she said.​​