‘What are you doing at a hospital for children?’ 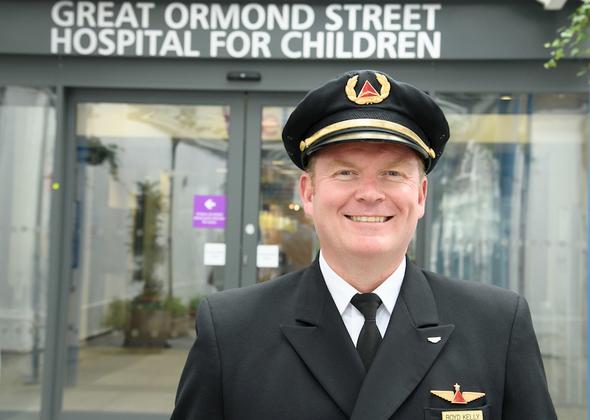 ​First Officer Boyd Kelly, a former patient of Great Ormond Street Hospital for Children in London, recently returned to the hospital to represent Delta. Here are his reflections.

As I walked towards Great Ormond Street Hospital, I felt somewhat apprehensive about what I was going to see during my first visit in over a decade. I'd been admitted to "The Hospital for Sick Children," as it was called in 1973, as an infant and again as a young child. I have always had a fondness for "GOSH" that I couldn't quite put my finger on. Today I'd be visiting not just as a former patient, but as part of Delta Air Lines' charity giving. 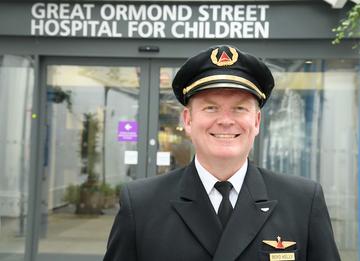 I stopped outside the hospital to do the obligatory selfie when I spotted a boy wheeling up and down Great Ormond Street using a GOSH wheelchair replete with '70s-style yellow smiley face wheels. He stopped in front of me, curious.

"What are you doing at a hospital for children?" he asked. I told him that I'd been a patient 45 years ago, and that I was back to visit because Delta Air Lines had contributed money to provide a sitting room for visiting parents. He smiled and told me that he had hemophilia. I asked him if it was difficult to deal with and he yes, that he couldn't play football.

That brought back my childhood memories and I remembered having been more worried about being unable to run in the school race than about why I was going to the hospital. I asked the boy if he wanted a set of pilot's wings and he asked me to clip them on. Then he gave me a germ-friendly fist bump and took off down the pavement again.

A place for children

As you walk towards the entrance to GOSH, signs tell you that there is no emergency room, nor normal admissions. The children that are admitted to GOSH must be referred by a doctor or another hospital. A visit to GOSH can be both lucky and unfortunate, because you generally have a very serious issue in order to be treated there. This is an amazing care facility, funded in large part by £90 million a year in donations, where top specialists come to help children fight some of the most difficult diseases in the world. 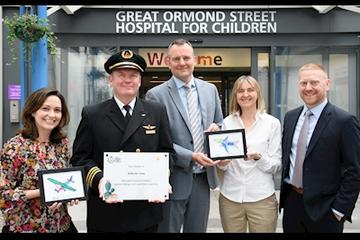 The GOSH I left looked nothing like this; I had memories of an almost Dickensian brick building with dark, cramped and stuffy wards. As I walked into the lobby I was greeted by sunlight, colored glass and bright paint. The walls were covered in art painted by the children. The main desk area looked like a ship, complete with treasure chest. I quickly felt relaxed as we continued further into the hospital. The staff have taken every opportunity to make this a place for children and mask any sterile hospital environment.

The lift had color-changing light panels in the ceiling so that children being wheeled around in their beds will have something to look at instead of a boring ceiling. High-definition monitors in a hallway show outside scenes based on the time of day and the weather outside. The wards are given names like Sky, Squirrel and Rainforest, not the diseases or specialties that are treated there.

I was going to Leopard, one of the newest wards. Our group was met by a Play Specialist. A Play Specialist! The Play Specialists are an integral part of the children's mental and physical care. There are dedicated play rooms where medical procedures are forbidden. They are full of games, toys and colored lights, and can also be darkened and made a quiet space. Some patients can be here months, and all of this is done to try and allow them to simply be children. The spirit of Peter Pan is strong in the DNA of GOSH and the Play Team, which makes sense as Peter's creator, Sir JM Barrie, donated the rights to the iconic play and novel to the hospital.

Along with playtime, school continues with some children even doing their GCSEs and A levels and, of course, they have the Internet. We see them doing video chats with their friends and family. This is part of their connection to the outside world in addition to visits from their parents and family. A number of the rooms are ensuite complete with beds and showers, allowing a parent to stay overnight with their children. 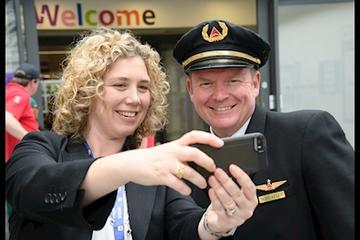 As our Play Specialist showed us around, the children waved from behind the glass of their rooms. All were in beds painted in a festive blue and green. Hospital equipment in the rooms is minimized as much as possible, and there is a television system with in-house movie channels and the ability to bring in favorite films. It's easy to forget that this is a hospital and that Leopard Ward is for serious respiratory issues, some of them terminal. We're told that the children know this, and some won't ever leave Leopard Ward to ride wheelchairs in the sun.

We stop at the new sitting room, with coffee and tea facilities for parents which has been funded by Delta. It's a quiet space for parents to "get away," with Internet access and a table to eat meals. I asked about the food quality and, apparently, some of the children even order sushi! We finished our visit to Leopard by visiting with a girl who had been there for five weeks and was reading Shakespeare for school. Her mother had been staying with her and was happy to have been able to do so, since they live far away.

Next we went to Robin and Fox, which house isolation rooms used for children with blood disorders, cancers and leukemia, immune disorders and patients requiring bone marrow and stem cell transplants. Children there will be in their "clean" cubicle for two to three months. Even in a ward as serious as this one the Play Team manages to help keep spirits up. One of the first things I saw was a big red "Take a Number" dispenser, except this one was labeled "Take a Joke." It's a functional art piece for distributing medical jokes that children and families have written to help cope with bone marrow transplants and being in isolation: #JokeMachine.

By then I was almost feeling guilty for having been treated here. My visits in the 1970s required a specialist, but today would probably be a common outpatient procedure. I had been seen by the late Sir David Innes Williams, who is regarded as the founder of pediatric urology. I was treated by the No. 1 surgeon in the field. How amazing is that? As part of our visit to Robin/Fox wards we were given a crash course in gene editing and using T-cells to fight leukemia. This research and treatment are emerging fields using technologies that are being invented daily, and GOSH is on the front line.

I look forward to seeing what comes next and will be proud to continue to support the Great Ormond Street Hospital Children's Charity.