When the U.S. Women’s National Soccer Team upset top-ranked Germany 2-0 Tuesday in the World Cup, who would've guessed the player who scored the crucial second goal in the 85th minute was a Delta pilot's daughter? 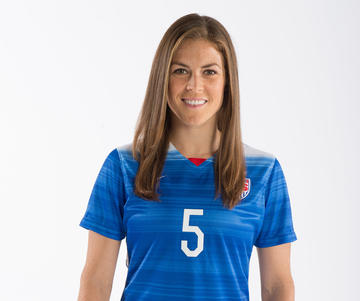 Her name is Kelley O’Hara, the 26-year-old daughter of Atlanta-based MD88 Captain Dan O’Hara. She scored on a crossing pass from star teammate Carli Lloyd to seal the win and extend the team’s streak of not allowing a goal to 513 consecutive minutes, a team record.

Kelley grew up in Fayette County, attending Starr’s Mill High School. The Olympic gold medalist was a forward during her collegiate career at Stanford, scoring 57 goals to rank second all-time for the Cardinal and winning the 2009 Hermann Trophy.

"Dan's daughter, Kelley, and my son graduated from Starr's Mill in the same class, and I remember watching Kelley and the high school soccer team going to state playoffs several years in a row," said Captain Chris Frederick, Director and Chief Pilot. "She was a star then, and it's a lot of fun to see her continued success now. I'm sure Dan and her family are proud of her accomplishments and the team's success."

“She is a southern girl at heart. As Kelley grew up playing all sorts of sports, she never thought she would want to leave home. But her soccer travels for the USA’s youth and senior national teams, as well as a brilliant career at Stanford, have led her to live on both coasts and have taken her around the globe, opening her eyes to a world she embraces while living life to the fullest.”

The U.S. will play in the championship game in Vancouver on Sunday. It’s been 16 years since the Americans have won the title.