As Delta ramps up its fundraising once again for the Breast Cancer Research Foundation, learn more about some of the airline’s most passionate people and what drives them to fight for a cure.
DELTA NEWS ON THE GO. Subscribe and follow.

Delta people are passionate about raising money for the Breast Cancer Research Foundation, and every year they get creative and crafty in helping raise millions toward a cure.

October is Breast Cancer Awareness Month, and that means it is once again time for Delta people to don pink and fight a disease that has affected many of them deeply and personally. The Breast Cancer One charter flight returned after a two-year hiatus, flying over 150 survivors and unsung heroes from Atlanta to Salt Lake City. (Watch a video about the flight at the top of this page.)

Since its initial partnership in 2005, Delta has raised over $24 million and funded over 88 BCRF projects.

Our customers are also instrumental to our fundraising efforts: Last year, customers contributed $1.75 million to BCRF. Those wishing to donate this year can visit delta.com/BCRF.

Below is a look at some of the Delta people who go above and beyond each year to raise funds, and what it means to them to get involved. 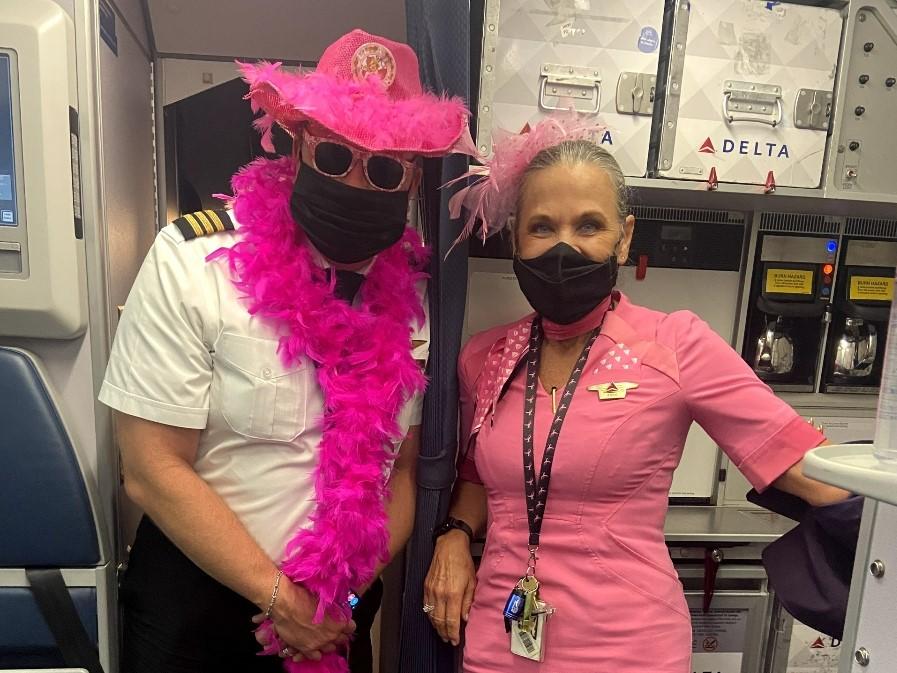 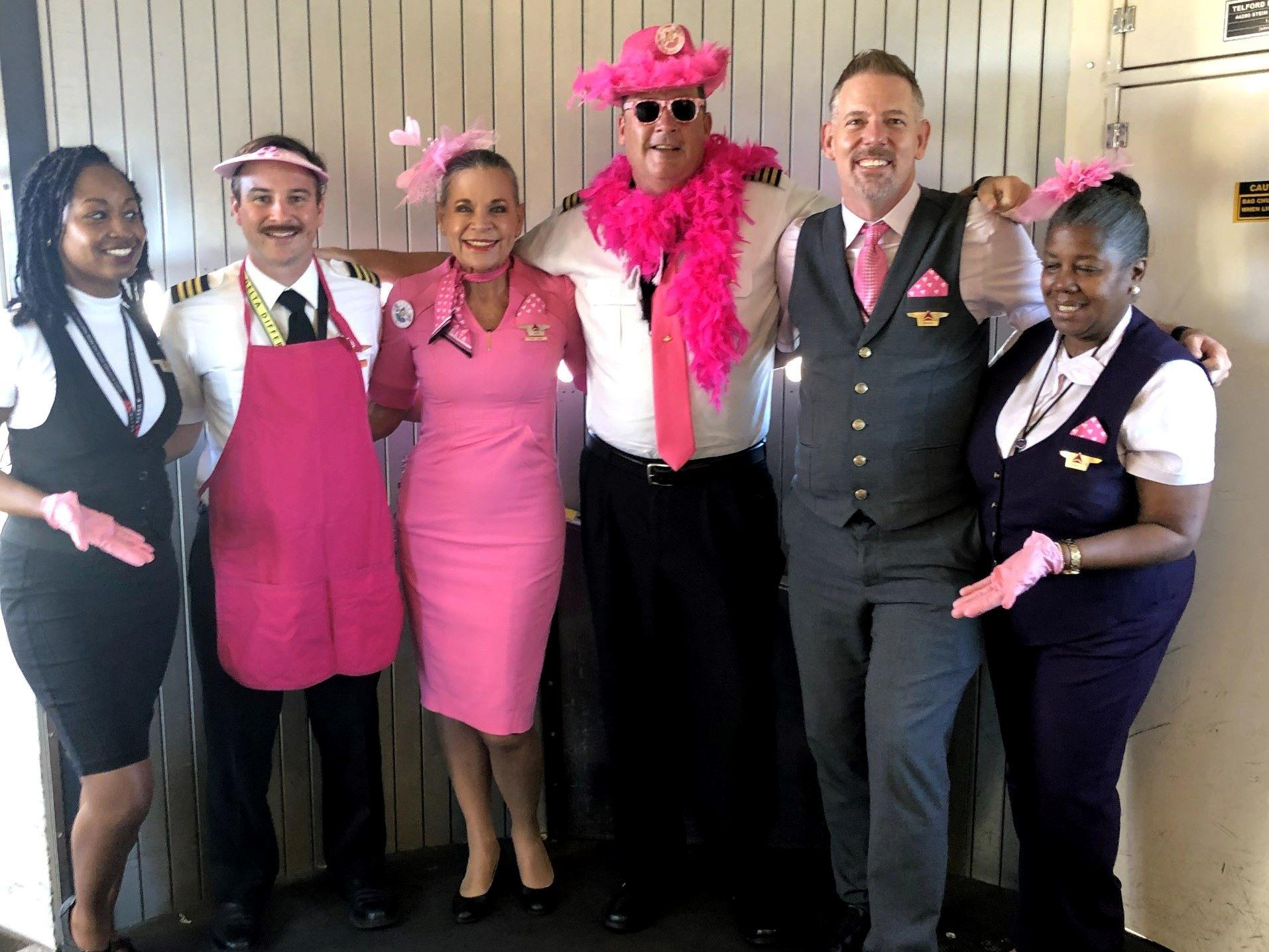 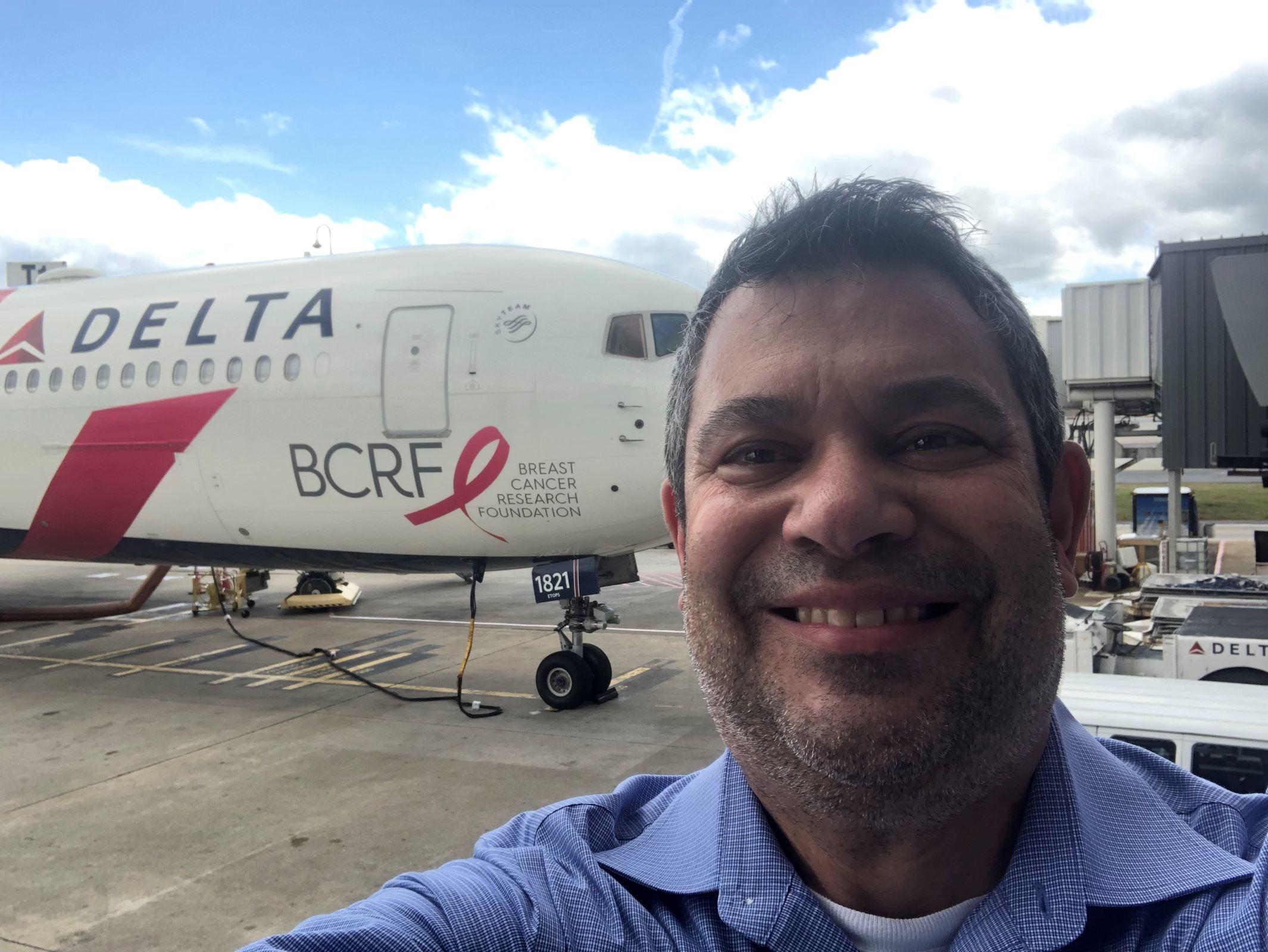 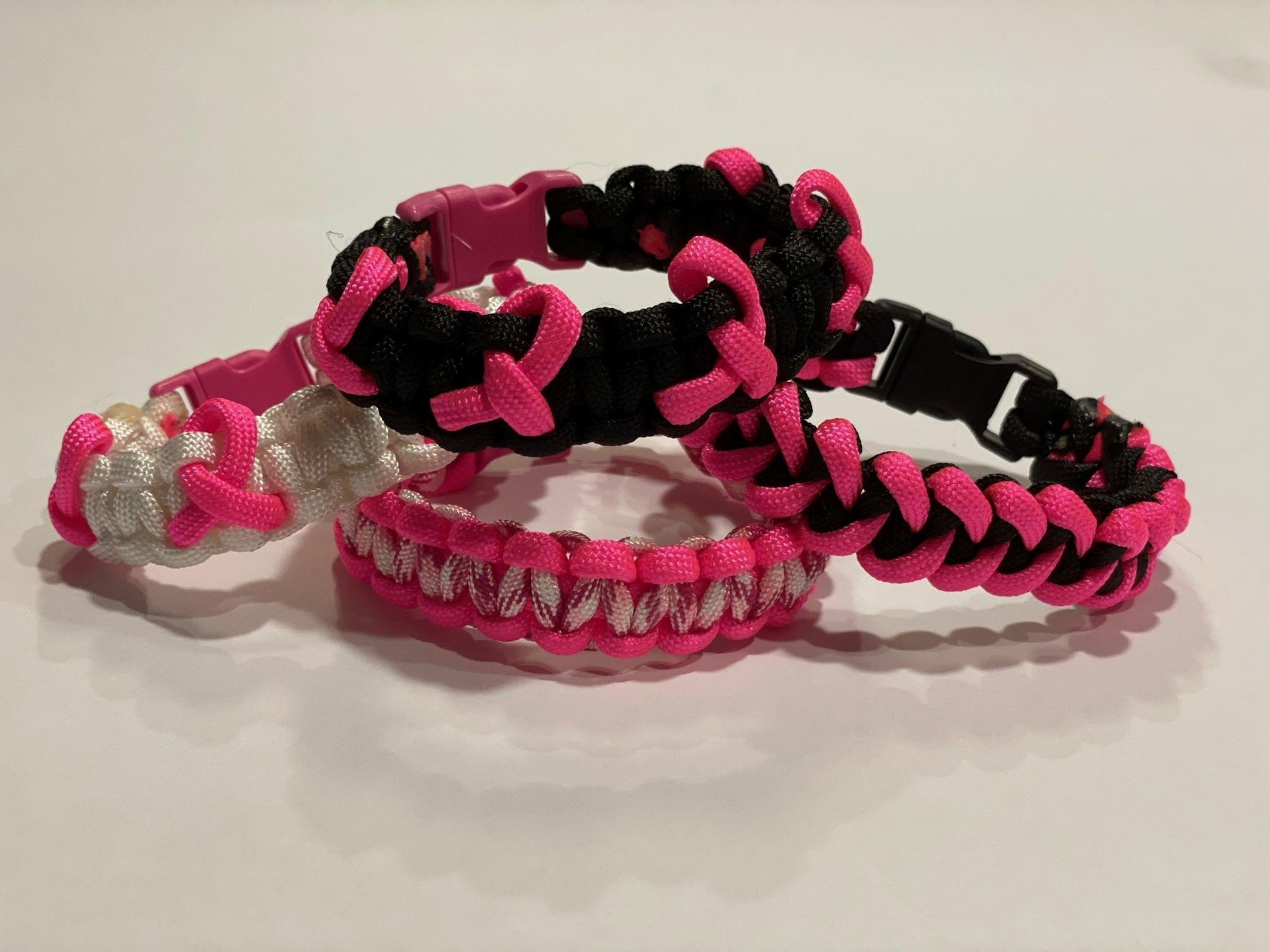 An example of the bracelets sold by Delta mechanic Jonathan Zwerling to raise money for the Breast Cancer Research Foundation. 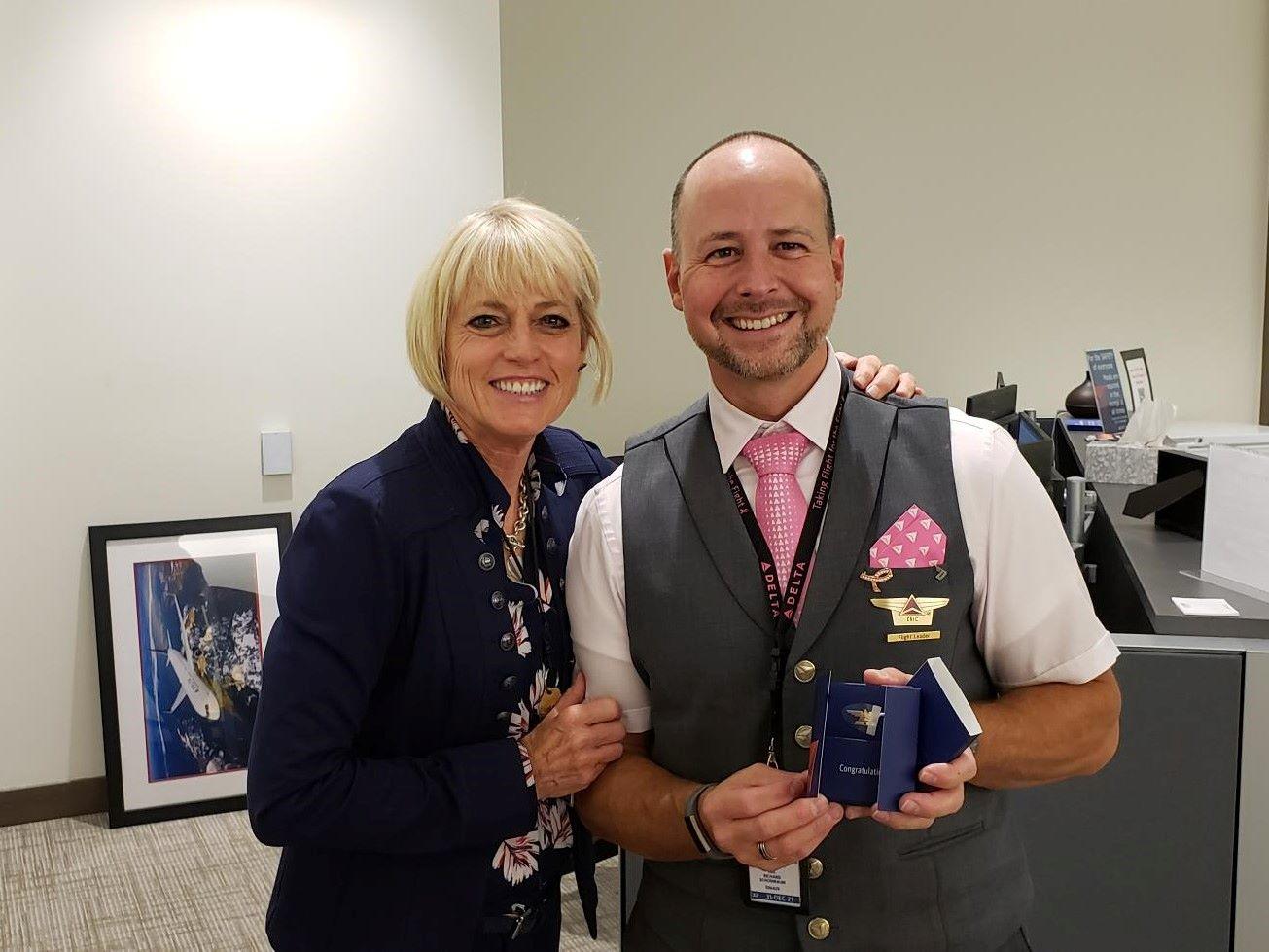 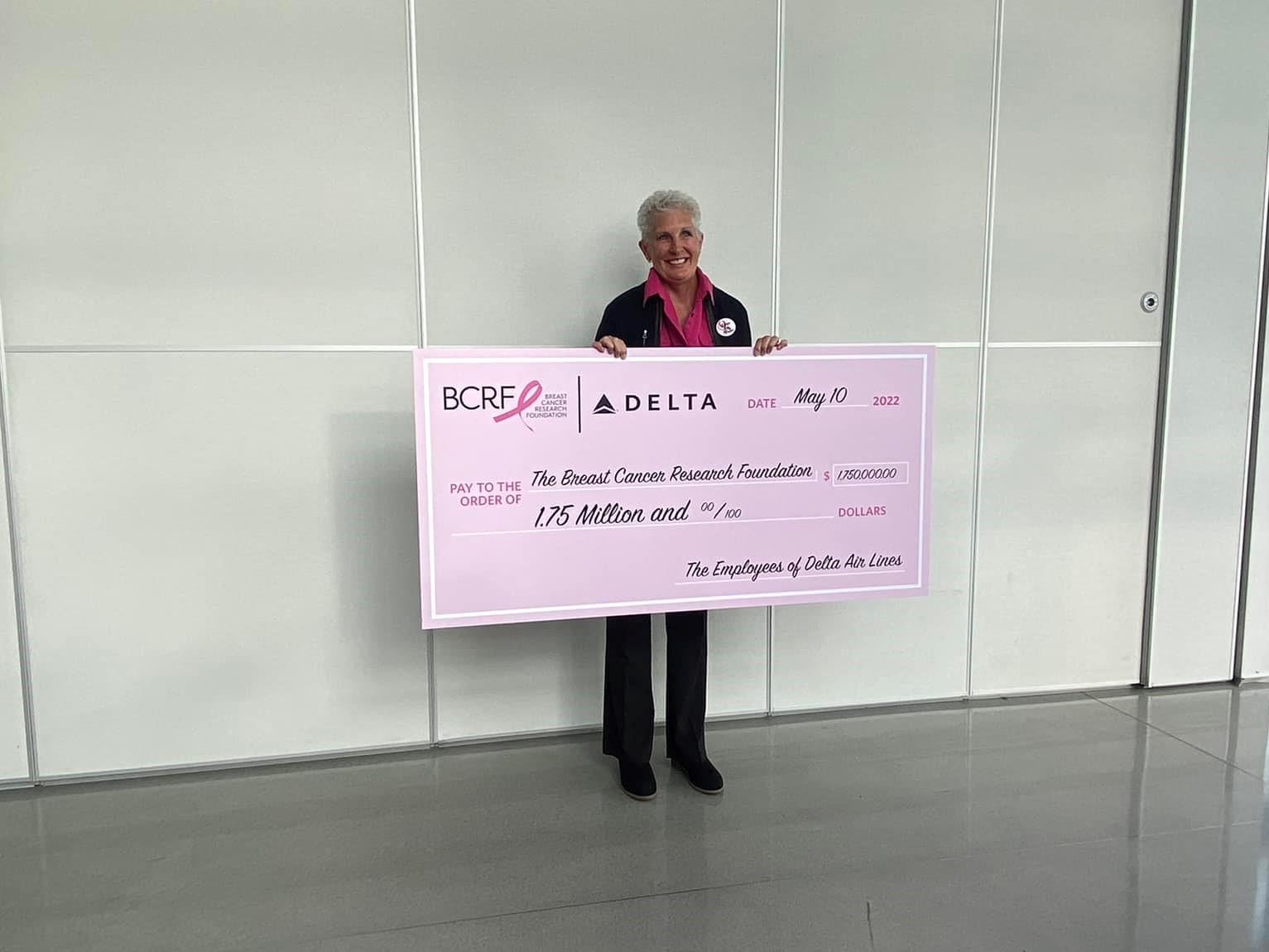 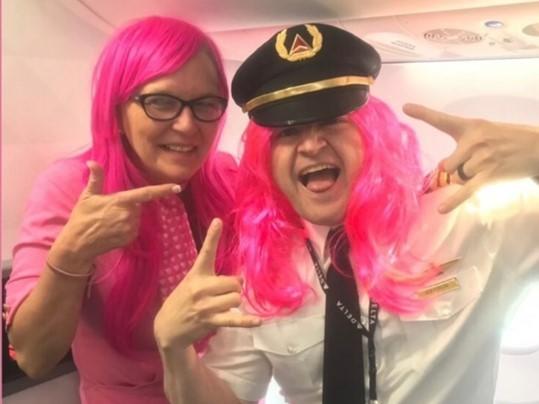 Flight attendant Robin Schmidt is pictured with one of her Delta colleagues.

As a person who loves exploring the outdoors, Jonathan makes paracord bracelets, a survival and utility item for any camper, hiker or outdoor enthusiast.

“It’s a hobby for me, and you carry it around with you in case you need extra cord for outdoor activities,” Jonathan said. “You can make a bracelet and have 15 feet of cord. It’s very convenient.”

Jonathan used his hobby to raise funds for BCRF in October last year, setting up an area to collect donations for the bracelets during his lunch breaks two days a week and loading the donations on the BCRF funding page.

Jonathan said hearing the stories of others and rallying behind those who are affected motivates him to help the cause.

“Since Delta supported it, I wanted to support it. But as I talked to more people, it inspired me more,” Jonathan said. “This research is making advancements and these stories give my work even more meaning.”

There are many people in Anna’s life that fuel her passion to support BCRF, namely her mother, who had a double mastectomy, and several friends.

“I’m very passionate about the cause,” Anna said. “I do believe in research, and the more we research, the earlier we will detect breast cancer.”

Anna gets customers excited by devising interactive challenges based on how many passengers are on board her flights, with the average target being $500.

“If I meet the target then, with the pilot’s permission, one of the passengers or even the pilots stand near the flight deck with a pink feather boa, pink cowboy hat and pink sunglasses,” she said. “They really love to participate.”

Anna is eager to continue supporting the cause in the skies through Delta’s fundraising efforts.

“Delta is doing a great job bringing awareness to breast cancer,” Anna said. “I’m so glad that I can play a part in it.”

Linda Schlappy knows what it’s like to face a life-threatening disease – she’s a survivor of ovarian cancer. And that’s why, each October, she’s proud to take up the cause of Breast Cancer Awareness Month.

“I enjoy collecting donations for any cause to raise money for research, and I enjoy the announcement I make to get people excited about giving money to a great cause,” Linda said. “I just figure any monies I can get to research is good money.”

Linda said she’s grateful to have the support of her peers and for her second chance at life as a survivor.

“I have always said that cancer changes you. What you do with those changes can and will make an impact on the rest of your life,” Linda said. “I am so, so grateful for life and that I made it through ovarian cancer when so many others have not.”

Linda was also able to attend the Hot Pink Party and saw the direct contributions from her work toward finding a cure.

“It gives me hope that more people can and will survive,” Linda said. “I also think it’s great that 91 cents of every dollar goes directly to research. I think it’s a huge benefit to raising more money.”

Eric also uses his platform as a flight attendant to encourage donations from customers. His passion stems from the legacy of his grandmother, who went into remission for 11 years after her initial diagnosis. She passed away after Thanksgiving in November 2004, six months after doctors found it once again in her system.

“It was my first impact with it,” Eric said. “I like to support because somebody I knew and loved was taken away by this. It’s touched me in a lot of ways.”

Eric also stresses the many ways to give and all the funds going directly to BCRF. Customers are typically directed to delta.com/bcrf, and he also helps transfer gift card balances to the cause. On international flights, customers often contribute leftover foreign currency from their travels.

“I proudly wear the little pink lapel pin and put on my fundraising hat and march up and down the aisle like a preacher in church,” Eric said. “I have no expectations – if people put a penny in there, I’m grateful. But people drop $20, $50 and even $100 bills. It’s incredible.”

“I went through a lot with my diagnoses,” Angela said. “I like to raise money for this cause to find a cure so others won’t suffer as much as I did.”

Angela raises her funds with her team by sourcing specialty items from employees and then creating ornate baskets with the items. She also hosts food sales in employee break rooms.

“We get an assortment of items from gift cards, candles and even received a gift certificate for a set of tires one year,” Angela said. “We also make food like tacos and burgers. Everyone loves when we host food days.”

Due to Angela’s notable fundraising efforts, she was invited to attend the Hot Pink Party hosted by BCRF – a high-energy conference that updates attendees on the organization’s extensive research and provides opportunities to connect with other survivors.

“I’m super excited to go this year and ride the Pink Plane,” Angela said. “Delta does a great job making people aware of this issue while maintaining support for those who are impacted by it.”

For Robin, fighting cancer hits too close to home: her father, grandmother, three aunts and several beloved work colleagues have all been afflicted by breast or lung cancer.

“I do it in memory of those I’ve lost,” Robin said. “I want to share hope to those fighting it and for the caregivers who may not have a support system. I want to make a difference, and it’s beautiful to have friends and family that have been helped by BCRF.”

Along with making fundraising and awareness announcements in the gates and on the aircraft, Robin also gives away pink trinkets to customers and crew that she has collected all over the world.

“Whether it be a scarf from Turkey or a hat from Alaska, I do this with the intention of not getting anything out of people, but simply being kind and bringing a smile to someone’s face,” Robin said.

“I’m blessed to work for a company that champions my passion of finding a cure one day,” Robin said. “I love that we have a Delta team across the world fighting to find a cure with every penny raised.” 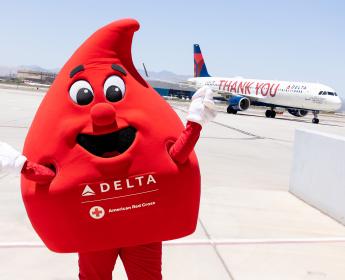