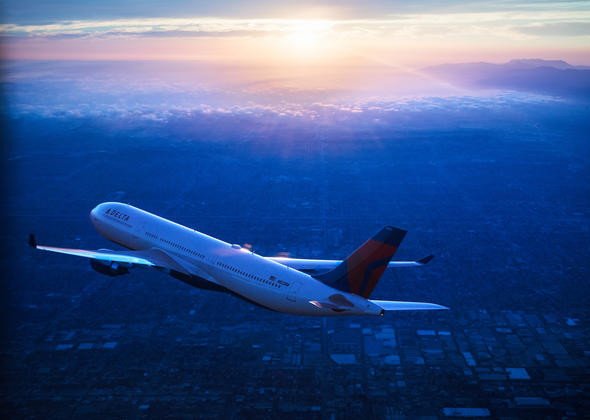 Download
This announcement is part of Delta’s ongoing commitment to protecting the planet which, since 2005, has resulted in a 9 percent decrease in emissions as Delta works toward its long-term goal of reducing its emissions
DELTA NEWS ON THE GO. Subscribe and follow.

Building on its $2 million investment for an ongoing feasibility study with Northwest Advanced Bio-Fuels (NWABF), Delta has entered into one of the largest airline offtake agreements of its kind to purchase sustainable aviation fuel, if produced, from NWABF.

The feasibility study, announced in October 2019 and currently underway, is expected to determine the potential for a facility in Washington state that could supply sustainable aviation fuel for Delta operations in Seattle, Portland, San Francisco and Los Angeles by mid-2020.

In parallel with the study’s goal to produce sustainable aviation fuel for West Coast operations, Delta has signed an offtake agreement for sustainable aviation fuel that may be produced from the facility, which would reduce lifecycle emissions up to 80 percent compared to that of conventional jet fuel. This complements the airline’s recent offtake agreement with Gevo for biofuel production in Minnesota, expected to be available between 2022-2023.

“This focused study and long-term agreement will support Delta’s goals to lower our carbon footprint aggressively. Investing in developing multiple sources of sustainable aviation fuel is one of the many ways we are looking to address climate change,” said Alison Lathrop, Delta’s Managing Director – Global Environment, Sustainability and Compliance. “Working alongside Northwest Advanced Bio-Fuels to produce and utilize sustainable aviation fuel could serve as an industry-best-practice-model for future endeavors.”

“We are very excited to deepen our work with Delta Air Lines and both of our world class teams to improve sustainability,” said Dave Smoot, Head of Northwest Advanced Bio-Fuels. “Our fuel project and agreement will bolster Delta as a key leader in the renewable sustainable aviation fuel industry.”

The NWABF offtake agreement would anticipate fuel production by the end of 2024 while the advanced planning study will conclude later this year.

Since 2005, Delta has reduced its jet fuel consumption, leading to an 9 percent decrease in emissions as Delta works toward its long-term goal of reducing emissions. Delta is also investing in new, more fuel-efficient aircraft to optimize the use of jet fuel. In July of 2019, Delta flew the first of 20 carbon-neutral new aircraft delivery flights from the Airbus final assembly line in Mobile, Ala., utilizing sustainable aviation fuel and carbon offsets in coordination with Airbus and Air BP.

These sustainability efforts have resulted in Delta being awarded the Vision for America Award by Keep America Beautiful in 2017 and the Captain Planet Foundation's Superhero Corporate Award in 2018, as well as being named to the FTSE4Good Index five consecutive years and the Dow Jones Sustainability North America Index nine consecutive years.