At Delta, we know the resilience it takes to arrive at a historic moment. We also know the journey is just as important as the destination. Alongside Team USA, we will continue to inspire the world with what's possible.

Our A330-900 aircraft is emblematic of our support of Team USA. The jet features a custom-designed livery that embodies the spirit of resiliency and perseverance and an inspiration of upward momentum.

Below, you’ll find more information about the sponsorship, the aircraft, the livery design inspiration and learn more about Delta’s historical support of the Olympic and Paralympic Games.

Delta’s partnership also includes a commitment to NBCUniversal over eight years, including multi-platform advertising within coverage of four upcoming Olympic and Paralympic Games as well as media activation in non-Olympic years. NBCU will work closely with Delta to chronicle and celebrate its Team USA journey.

Delta ship 3411 (N411DX) is the tenth A330-900 delivered to Delta from Airbus from an order of 37. Delta took delivery of the ship in Toulouse, France in May of 2021. After completing additional post-delivery Prior To Service work in Narita, Japan and Minneapolis-Saint Paul, Minnesota, the ship entered revenue service on its inaugural flight flying from Seattle to Honolulu in June 2021. Ship 3411 flies daily on a variety of intracontinental and transoceanic routes.

Delta’s A330-900s are equipped with award winning Thompson Aero Seating Suites in Delta One and best in class Rockwell Collins seats in Delta Premium Select, Comfort+ and Main Cabin, all with in seat power. The A330-900s are also equipped with in-flight WiFi and industry leading in-flight entertainment systems designed and sourced entirely by Delta Flight Products.

The custom Team USA aircraft livery aims to embody Delta’s enduring support for the athletes, and a pursuit of excellence—the very spirit of Keep Climbing—as it takes flight both at the Games, and every day of the year.

The Team USA livery was designed with Delta’s “Look of the Games,” which was developed by Delta’s in-house creative studio, Window Seat. “Delta’s brand is a symbol of resilience in its own right, so it was important to maintain the consistency of branding elements — the logo, belly and vertical stabilizer—all the recognizable features customers have grown to love and appreciate,” said Shane Edwards, Delta’s Product and Experiential Design Manager.

The clean, classic design of the livery promotes the partnership between Team USA and Delta and was executed internally by a crew at TechOps. A fully painted livery was opted over the use of decals so the painting could be done in house as well as have a much longer life.

The design was revealed on Friday, Dec. 17, to a crowd of hundreds of Delta employees and media.

Look of the games 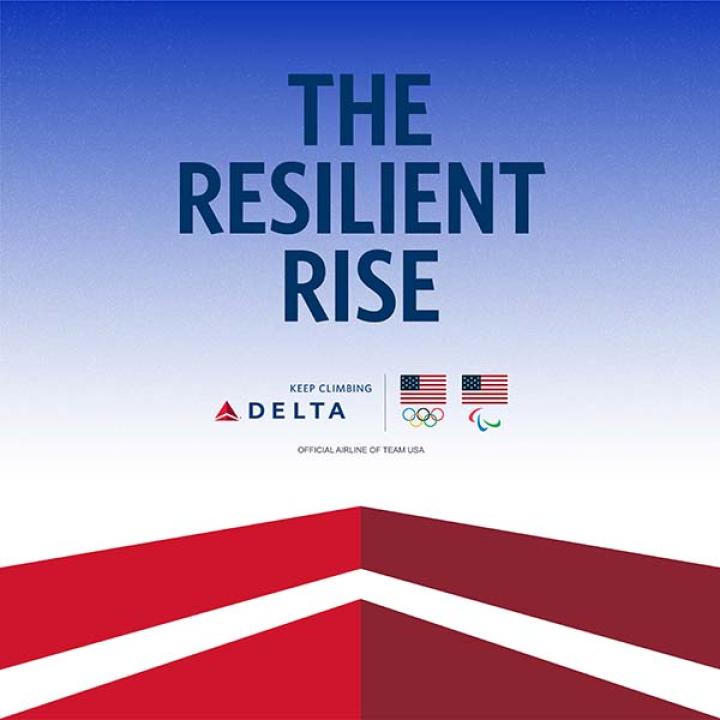 The Look of the Games is a creative expression that embodies the resilience of humanity. We have each been transformed by the experience of living through a global pandemic. Yet, through grit, determination, and perseverance, we – Delta, Team USA, and the world – kept climbing. Each design element is meant to evoke pride, optimism, and upward momentum. 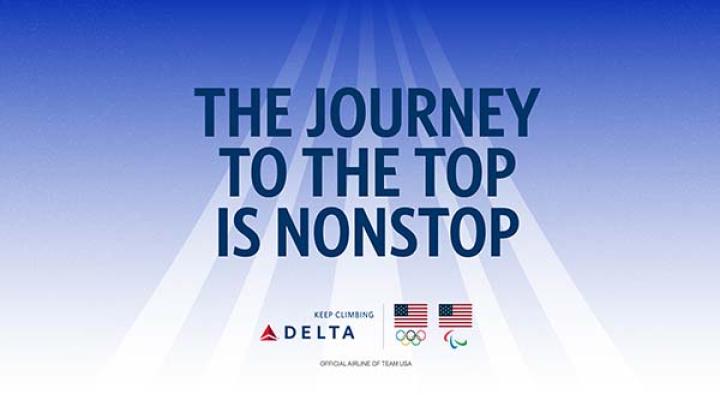 The Look of the Games design system was developed and created by Window Seat, Delta’s in-house creative team. The system offers a guide for design products such as aircraft livery, signage, advertising and marketing collateral, collectibles, merchandise and more.

Color and composition are married to capture the energy and zeal of Team USA and the Olympic and Paralympic Winter Games. Fittingly, Delta’s brand colors closely align to those of Team USA, offering a natural design cohesiveness.

A mild blue and white gradient evokes calmness and provides an uplifting anchor for the design.

In contrast, we show up unapologetically bold with pops of highly pigmented reds and saturated blues. The depth of the shades was selected to grab the viewer's attention and stand out from its surroundings.

All of the colors we use ultimately symbolize the pride we feel when representing our team, our people, and our home.

The Gradient represents the journey from one point or moment to another. It takes strength to continue on a difficult journey. This is reflected as the intensity of the gradient increases.

The subtle Grit Texture represents the grit and determination behind resilience. This alludes to the mental and physical toughness of both the athletes and our 96-year-old company. It is our persistence, effort, confidence, and character that allows us to keep climbing.

The Momentum Graphic illustrates the force needed to overcome our hurdles, whatever they may be. We are pushing forward, climbing together toward our goal of winning gold and connecting the world.

Jet Streams represent the current of air generated by incredible speeds and strong transverse gradients of velocity. These lines tie back to the path we are on, the course we are taking.

The strong winds of the jet stream boost the momentum of an aircraft when traveling great lengths and propel athletes closer to their destination. 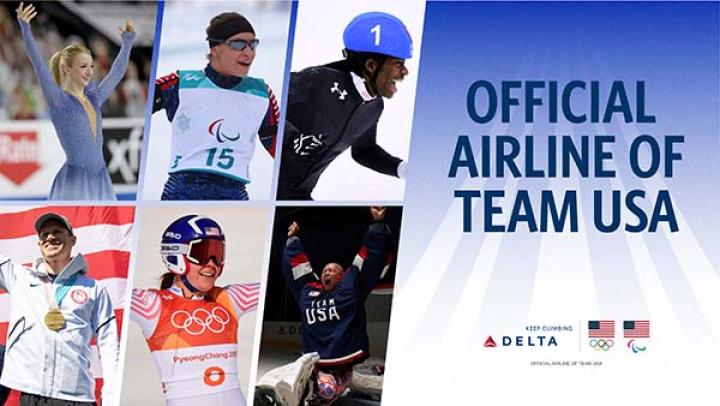 Delta has partnered with six inspiring U.S. athletes on their journey to the next Olympic and Paralympic Winter Games.

Delta has strong ties to both cities with Atlanta being the home of its headquarters and Salt Lake City one of its major hubs.

In 1998, Delta committed to serving as the Office Airline Sponsor of the Olympic and Paralympic Winter Games Salt Lake City 2002. The Games were held from February 8 to 24, 2002 and provided a unique opportunity for Delta to showcase its superior airline services and differentiate Delta in Salt Lake City and on a national scale. At the time, Salt Lake City was the home to Delta’s third largest hub and home to more than 4,700 employees.

Delta also partnered with the Salt Lake Organizing Committee (SLOC) to serve as the Official Charter Flight Provider of the 2002 Olympic Torch Relay.

Look of the Games

The Soaring Spirit represented a tribute to the majesty of the Wasatch Mountains, the unconquerable spirit of the American West and the inspired athletes who compete before the world. More importantly, The Soaring Spirit is a tribute to Delta’s people, as together they strive toward operational excellence. It was indicative of a new attitude, a renewed dedication, a renewed spirit.

A Delta Boeing 757 was named The Soaring Spirit and painted in an Olympic-themed livery in commemoration of the Olympic Winter Games 2002. The livery was inspired by the Look of the Games, featuring depictions of the Wasatch Mountains, the Games’ logo and colors consistent with the Games’ pallet.

One of Delta’s Boeing 777 aircraft was dedicated as Soaring Spirit II in commemoration of the airline being the Official Charter Flight Provider and Official Provider of the 2002 Olympic Torch Relay. The B777’s sported a dramatic livery featuring images of Olympic gold medalist Bonnie Blair and U.S. Olympians Duncan Kennedy and Ryan Heckman. The aircraft transported the Olympic flame from its home in Greece to North America.

The Olympic and Paralympic Games Atlanta 1996 took place in Atlanta July 19 through August 4, 1996. The Games provided a highly visible opportunity from which to communicate Delta’s worldwide service and to further its goal of becoming the Worldwide Airline of Choice. Then, as now, Delta embraced values it shared with the Olympic Games: commitment, leadership, dedication and excellence.

Look of the Games

To consistently portray an Olympic Games image, Copeland Hirthler was retained to develop Delta’s Look of the Games palette. This consisted of a series of common elements that would family with all previous work. A series of swooshes and the use of the Atlanta Committee for the Olympic Games (ACOG) Olympic torch in Delta corporate PMS colors were used to create this look, referred to as the Wings & Dreams look. The series was developed in the Fall of 1994 starting with a composite Delta/ACOG logo and utilized throughout the Games period.

The Wings & Dreams Look of the Games inspired custom aircraft liveries on two Delta jets – The Spirit of Delta, a Boeing 767 and Centennial Spirit, a McDonnell Douglas MD-11.

Centennial Spirit had the distinction of being the aircraft that carried the Olympic flame from Athens, Greece to the U.S. 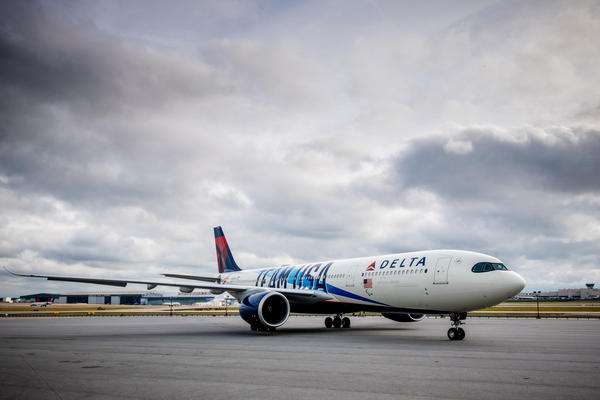 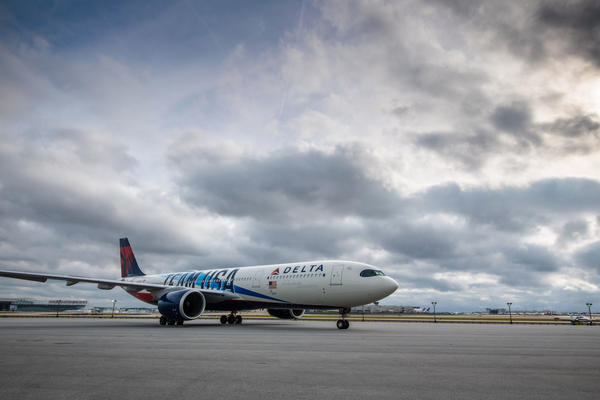 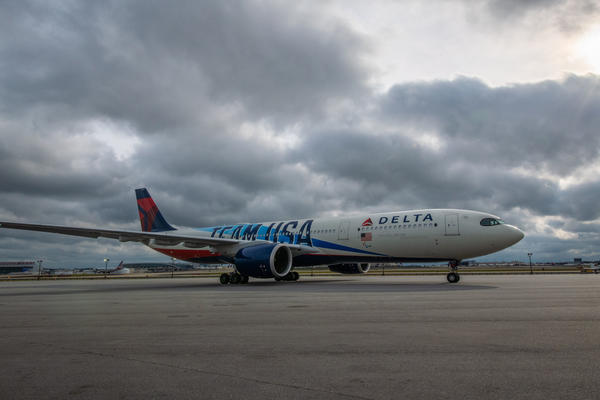 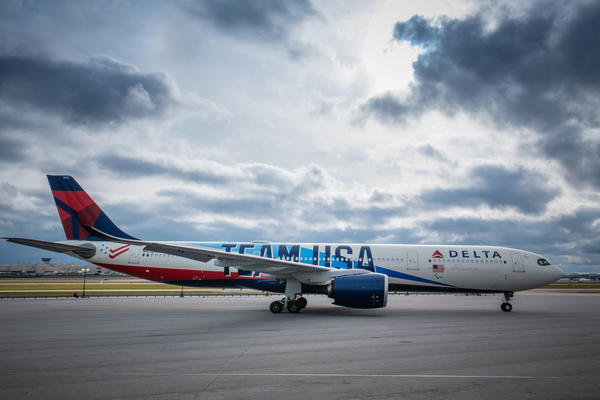 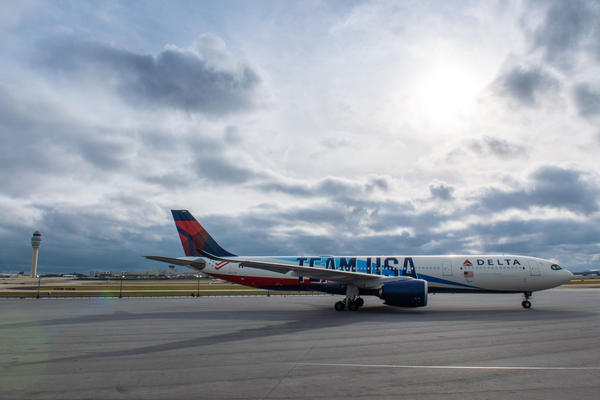 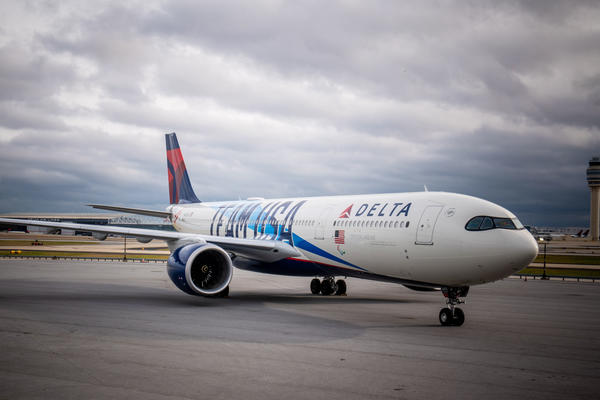 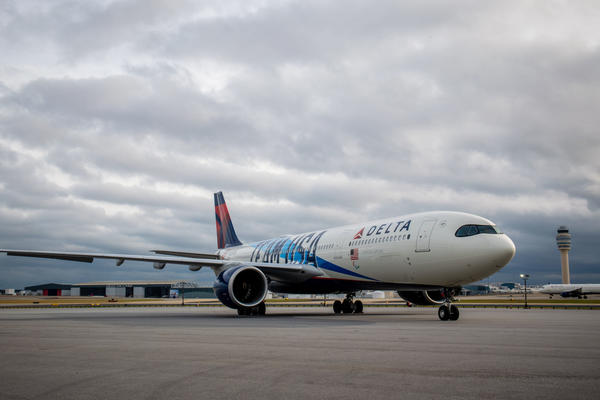 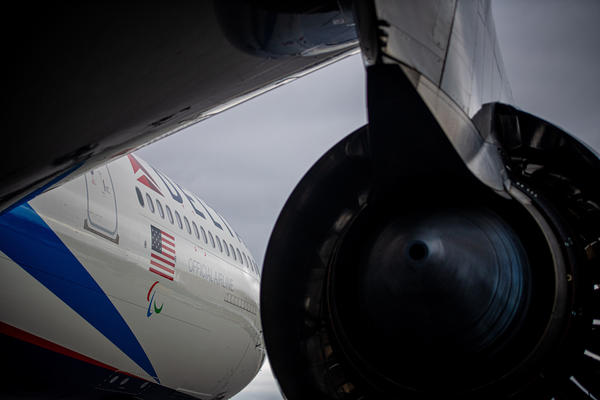 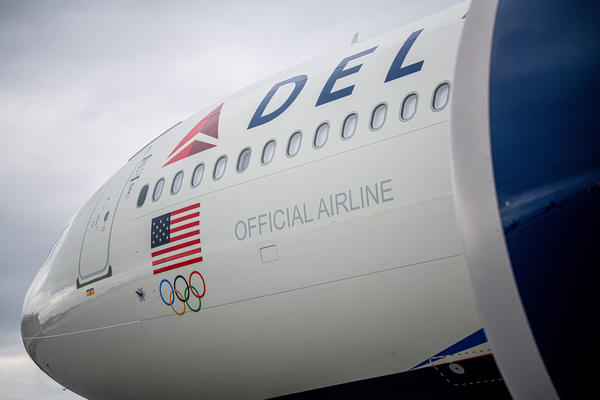 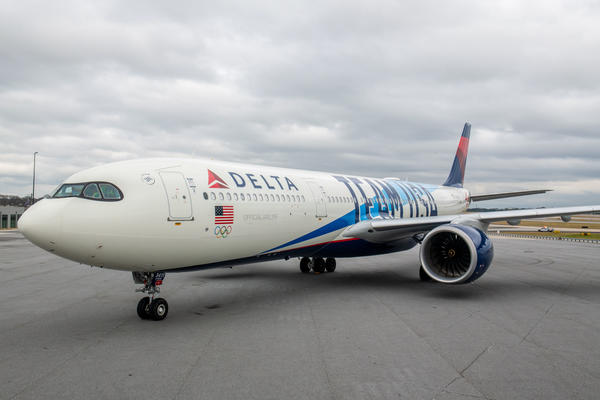 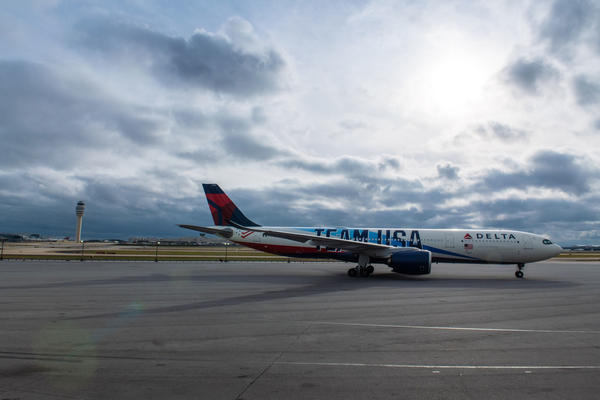 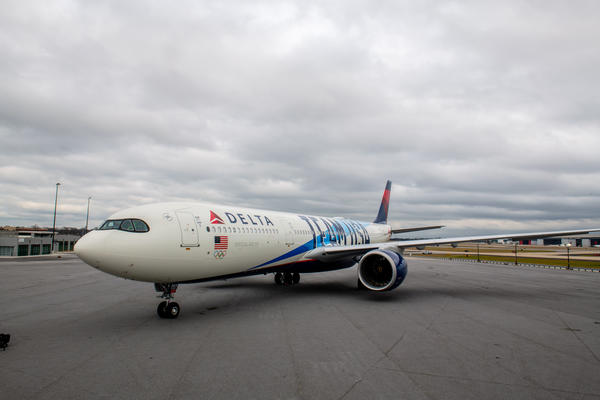 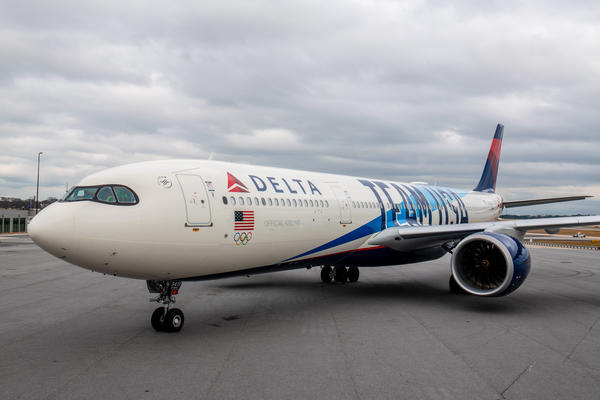 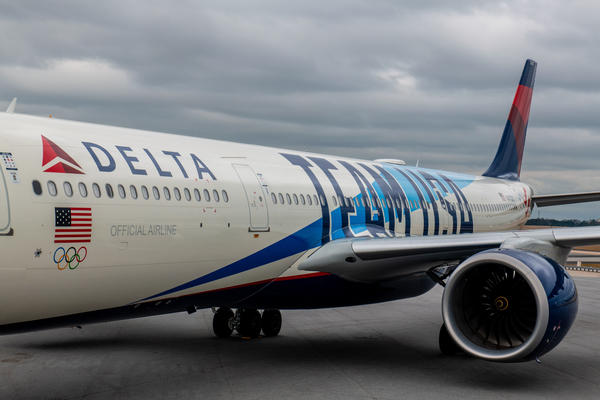 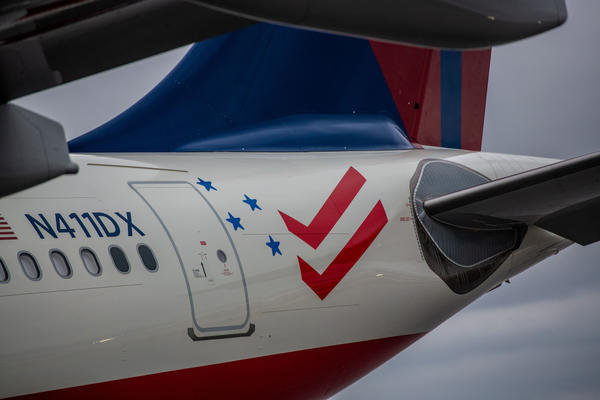 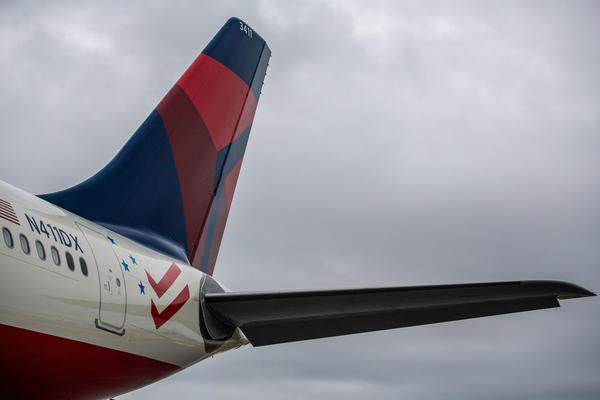 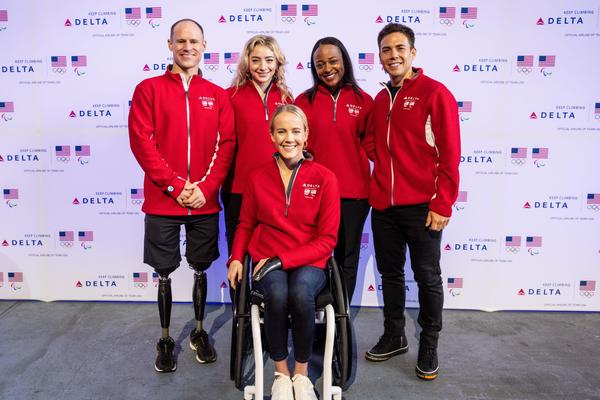 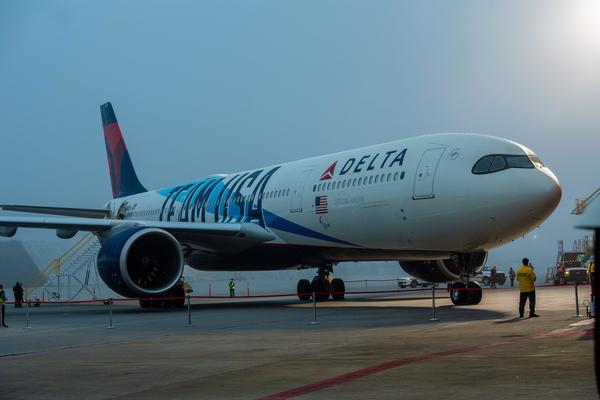 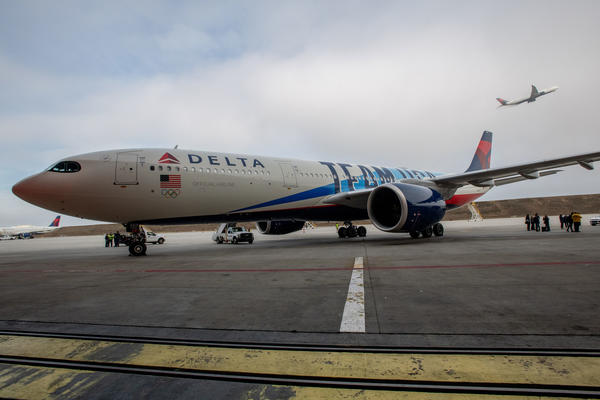 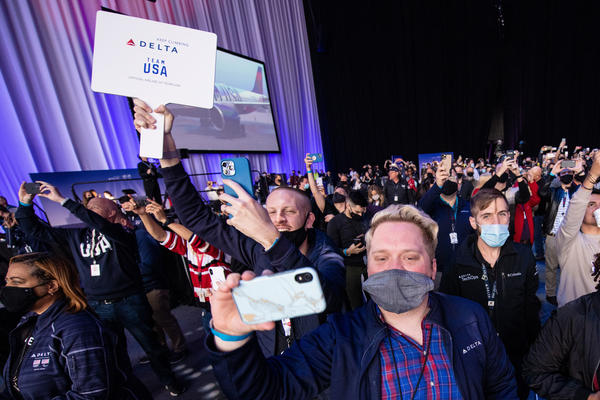 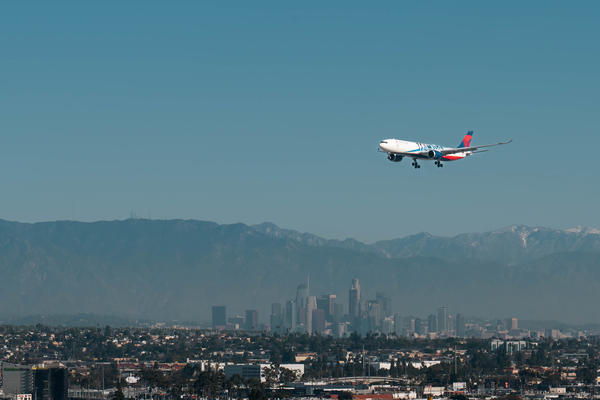 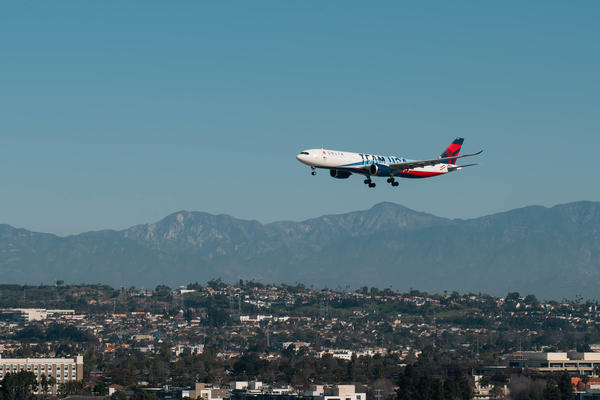 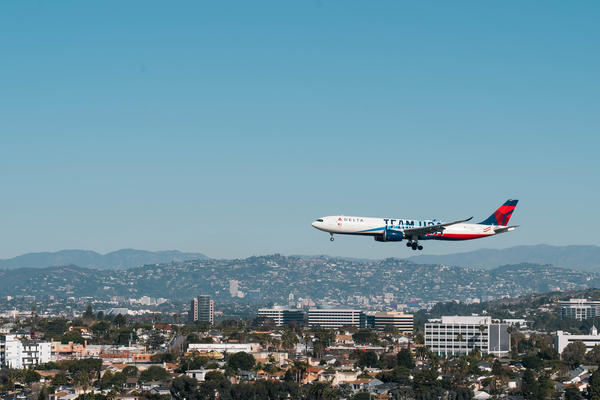 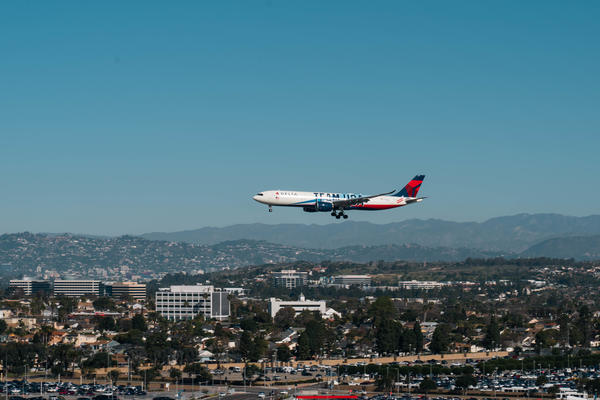 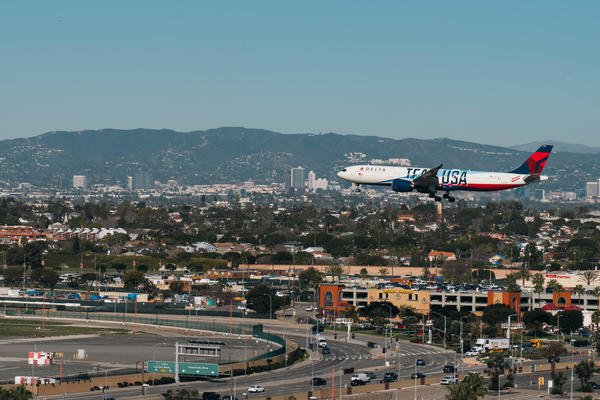 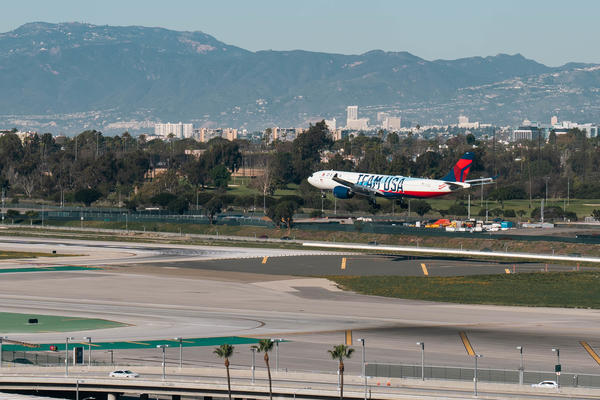