Delta Air Lines and Los Angeles World Airports (LAWA) have formally kicked off the Delta Sky Way at LAX project — Delta's $1.86 billion plan to modernize, upgrade and connect Terminals 2, 3, and the Tom Bradley International Terminal (Terminal B). Construction is expected to begin this fall. The project kick-off follows the LAWA Board of Airport Commissioners' recent approval of the largest tenant improvement award in its history, which cleared the way for the Delta Sky Way at LAX to begin. 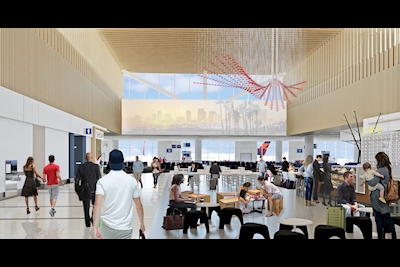 "Los Angeles is constantly reaching new heights, and today's project launch creates jobs and forges global connections," said Los Angeles Mayor Eric Garcetti. "The modernization of Terminals 2 and 3 is an investment in our economy and people, and Delta's partnership is helping to accelerate an era of growth and innovation in Los Angeles."

"Nearly 10 years ago, we made a commitment to be LA's premier, premium airline. Today, LAX is one of the most important hubs in our network where we operate more than 170 daily flights and connect more passengers to our partner airlines than anywhere else in the U.S.," said Delta CEO Ed Bastian. "The Delta Sky Way at LAX project is a once-in-a-generation opportunity to invest in and transform the airport experience in partnership with LAWA and the City of Los Angeles. Delta is excited and proud to be leading the way not just in LA but in our hubs across the country, with more than $12 billion in airport infrastructure investments in progress over the next few years." 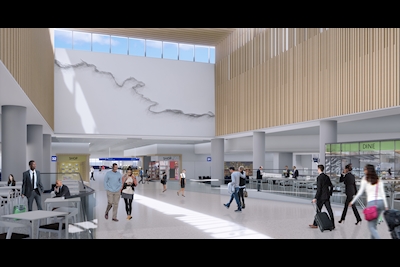 "Our vision is a gold-standard airport, and one of our strategic plan goals is delivering exceptional facilities and experiences at the same time," said LAWA CEO Deborah Flint. "And even though that is no easy feat, I am confident that with the team at Delta and the partnership we have, that we can achieve that vision."

Delta and LAWA also released new renderings of the facility today, which show the interior and exterior of the shared "headhouse" of Terminals 2 and 3; the interior, secured side of Terminal 3; and the connector between Terminal 3 and Terminal B, among other perspectives.

When completed, the modern facility will offer more security screening capacity with automated security lanes, more gate-area seating, and a world-class concession program in partnership with Westfield Corporation, in addition to all the amenities that Delta's customers have come to expect at LAX, including the Delta ONE at LAX check-in space, new Delta Sky Club; and the integrated in-line baggage system. Other key features and benefits include: 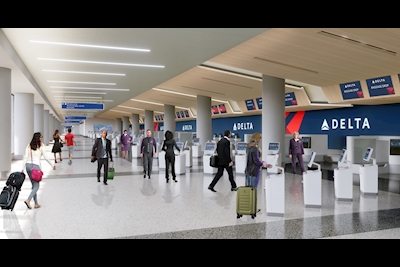 Premium amenities, operational improvements highlight ongoing enhancements to Terminals 2 and 3
Delta has already made a series of enhancements since its relocation to Terminals 2 and 3 in May 2017. LAWA and Westfield introduced a new retail and dining lineup in Terminal 3 in December 2017. Delta opened an interim Delta ONE at LAX reception in November, an exclusive and personalized check-in experience featuring a reception area and private corridor that takes customers directly to the front of the security checkpoint with easy access to TSA Pre-Check and standard lanes. CLEAR is available at Terminals 2 and 3 at LAX, and customers with a CLEAR membership breeze through airport security with just the touch of a finger or blink of an eye. The airline has also installed new padded seats in the gate areas with seat power coming in summer 2018. Finally, expanded space in Terminal 3 for Delta Sky Club guests will open this summer, nearly doubling the number of available seats.

Delta now operates alongside many of its airline partners, including Aeromexico, Virgin Atlantic and WestJet, at LAX. Later, the secure connector to Terminal B will enable seamless access to additional partners, including Air France-KLM, Alitalia, China Eastern, Korean Air and Virgin Australia.

Operational performance has already significantly improved at LAX. From June 2017-March 2018, the airline improved its on-time performance by 16 points versus the same period a year prior*, driven in part by improved taxi times and more efficient tarmac operations from converting the alleyway between T2 and T3 from single- to dual-lane operations, which allows two planes to proceed through the alleyway at the same time. Total taxi times have reduced by more than 8 minutes. 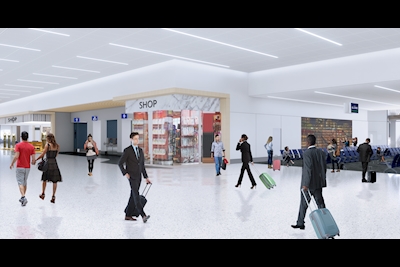 To prepare for the start of construction this fall, Delta has undertaken a series of enabling projects, including many that are already complete. Later this summer, security screening operations in Terminal 3 will be consolidated to the checkpoint on the lower level of Terminal 3 while construction begins on the mezzanine level. Customers should continue to access the security screening checkpoint from the ticketing level, where airport employees will direct them to their respective screening lanes, including TSA Pre-Check, CLEAR, and SkyPriority.

Customers are encouraged to take the following actions for a more efficient experience during construction: 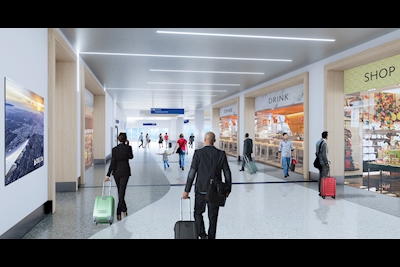 Sky Way at LAX interiorSince 2009, Delta has been the fastest-growing carrier at LAX and has invested billions of dollars in products, services and technology to enhance the customer experience in Los Angeles and across its network. These investments include adding free Main Cabin meals on select coast-to-coast routes, free mobile messaging, free in-flight entertainment, upgraded Main Cabin snacks, the addition of sparkling wine, access to Wi-Fi on nearly all flights, enhanced blankets and refreshed Flight Fuel food-for-purchase options. Recent upgrades to the Delta One in-flight experience include not only the launch of the cabin's newest menus, curated by Jon Shook and Vinny Dotolo, but also TUMI amenity kits with Kiehl's products, an Alessi-designed collection of serviceware, Westin Heavenly® In-Flight Bedding, and Delta's noise-canceling LSTN headphones.

Delta will launch direct service from LAX to Amsterdam and Paris in June in partnership with Air France-KLM, providing the most extensive time of day coverage to Europe and over 118 destinations in Europe, the Middle East, India and Africa. The airline will also deploy its new Airbus A350 aircraft featuring the Delta One Suite and Delta Premium Select on the LAX-Shanghai route in July. In 2017, Delta launched daily nonstop service to Mexico City as well as Washington-Reagan Airport — becoming the only airline to offer flat-bed seats in the front cabin on that route — and Delta's joint venture partner Virgin Australia began service five days per week to Melbourne on a Boeing 777-300ER. Virgin Atlantic launched a third daily round-trip flight on a Boeing 787-900 between LAX and London-Heathrow. 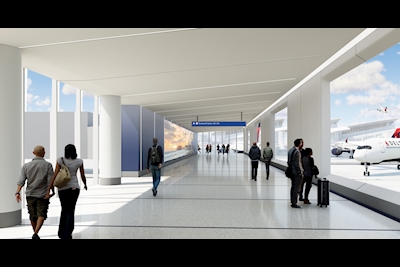 Delta's 4,200 LA-based employees are deeply integrated into the community, working with dozens of org​anizations and supporting causes that are near and dear to the hearts of Angelenos, including AIDS Walk Los Angeles, Children's Hospital Los Angeles, Covenant House California, Habitat for Humanity of Greater Los Angeles, Junior Achievement of Southern California, KaBOOM!, LA Regional Food Bank, and The Motion Picture and Television Fund, among many others.

Delta has invested more than $7 billion in airport projects since 2006, and along with its airport partners, Delta will be involved in an additional $12 billion worth of facilities infrastructure projects in coming years, including improvements at several of its key hubs in Atlanta, Los Angeles, New York, Salt Lake City and Seattle.