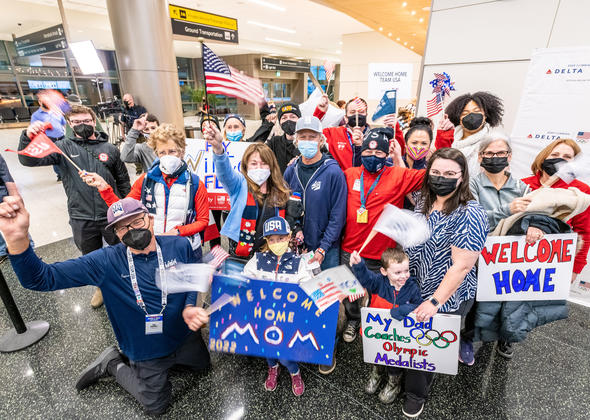 Download
As Team USA touched down from the Olympic Winter Games, Delta employees with friends and families of the athletes celebrated their return at Salt Lake City International Airport.
DELTA NEWS ON THE GO. Subscribe and follow.

Editor's note: A downloadable b-roll package is available for media.

Delta carried athletes on a charter flight from Beijing to SLC following the Closing Ceremony. The flight included 111 Olympians as well as coaches, trainers and staff returning from Beijing. Delta athlete ambassador Maame Biney was on board along with several athletes with a special connection to the global carrier. Upon arrival, Maame was surprised by her childhood friend, Tori, who flew to SLC for the team’s arrival.

Speed skater Ryan Pivirotto was greeted by his fiancée, Nikki, whose mother, Kris, is a Delta Flight Attendant.

Furthering its commitment to Team USA, Delta will host a red-carpet send-off event at Los Angeles International Airport to celebrate U.S. Paralympians departing for the Paralympic Winter Games Beijing 2022. The charter is scheduled to depart to Beijing on February 25.