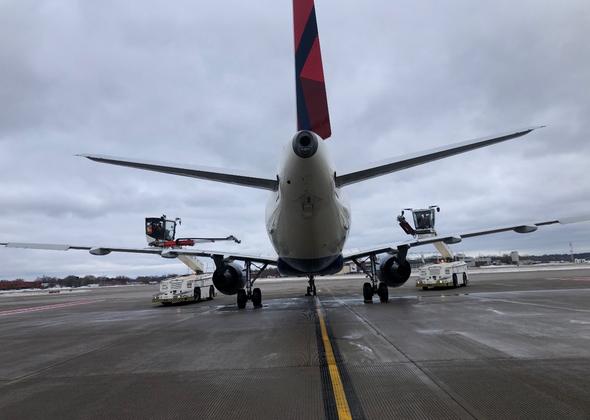 Download
De-icing is a meticulous yearlong operation essential to ensuring Delta aircraft can take off safely and deliver the reliable, world-class operation customers expect.
DELTA NEWS ON THE GO. Subscribe and follow.

If you’ve ever flown during the winter months out of cold, snowy climates like Delta’s Minneapolis hub, you’ve probably heard the familiar crackle of an aircraft’s PA system followed by the captain’s advisement that your sky-chariot needs de-icing.

It’s not something most passengers give a second thought - their journey proceeds as planned, the endeavor out of sight, out of mind. You may not have realized just how crucial that process can be to a safe journey, nor the expertise needed to do it the right way.

To help us break down how it all works, we turned to our seasoned people at our Minneapolis-St. Paul International Airport hub. There, Delta operates around 300 daily flights to nearly 70 destinations.

Getting people where they need to go safely and on time is Delta’s most vital promise, and de-icing crews are a critical component of that. Since October, our people at MSP have de-iced nearly 6,000 aircraft – just part of the over 30,000 aircraft that have been de-iced across the system.

“Like all Delta people, they are our strongest competitive advantage to being the best carrier out of MSP,” said Eric Phillips, S.V.P. – ACS, Cargo Ops, Clean and Ground Support Equipment “De-icing is mission-critical to running the safest and most efficient operation in the U.S., and we couldn’t do it without the knowledge and careful work of our people.”

You can get a behind the scenes look at the de-icing process from Minneapolis news stations KARE 11 and WCCO.

“I wouldn’t trade it for the world. It’s an incredible job,” said Corey Ellis, Ramp Agent and Trained De-Icer in MSP. 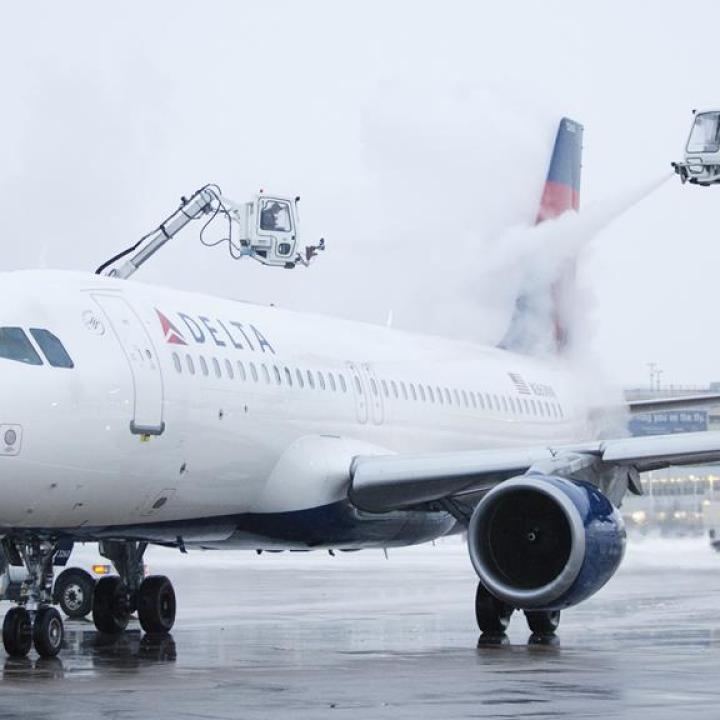 Article
Awards & Recognition
Delta people key to Cirium award win for operational excellence
Cirium’s new annual award is presented to an airline with outstanding performance considering the complexity of the airline’s operation, volume of flights, diversity of its network and other key operational factors.

Read on for a look behind the scenes at what goes into frost-free flying.

De-icing is Essential to Safe Aviation

Even small amounts of frost on a plane can affect its ability to generate lift and take off safely. When temperatures dip below 50 F (10 C) at any location (usually starting in mid-October at MSP), all aircraft are inspected daily for any signs of contaminants like frost or ice. Delta’s de-icing process has been meticulously optimized to ensure Delta’s signature safety and reliability.

Proper de-icing in turn helps prevent delays and cancellations that can have a ripple effect throughout the Delta system.

It may be a cold-weather endeavor, but Delta crews work year-round to keep their skills sharp. Each summer, Delta people at MSP host an intensive training certification program to teach agents from across the airline how to properly apply de-icing and anti-icing fluids. To qualify, each participant must master an online assessment, and the remainder of the course involves both classroom and hands-on training.

What Do They Spray on the Planes, Anyway?

De-icing fluid is a mixture of propylene glycol and other chemicals and water, heated to 160-180 degrees F and sprayed under pressure to remove frost, ice and snow on the aircraft.

If snow, freezing rain or sleet is falling, anti-icing fluid must be applied to critical surfaces like the wings and tail after de-icing is complete.

On an average frost day, which is almost every day October 15-April 1, MSP uses about 2,000 gallons per day to remove frost that develops overnight. On a snowy day, the hub uses on average 40,000-50,000 gallons of glycol. After spraying all this fluid, MSP recycles it for other purposes, such as anti-freeze.

How Does the Process Work, and How Long Does it Take?

Delta crews across the system are trained to carefully and efficiently de-ice aircraft to keep our operation on time. First, pilots put down wing flaps and disable aircraft ventilation systems to keep out any chemical odors. From there, a nose-to-tail de-icing spray can take as little as five to 10 minutes, depending on the size of the aircraft.

Anti-ice spraying takes an additional five to 10 minutes, which means one crew can fully treat up to six planes an hour, barring a major weather event.

How Many People Does It Take to De-ice an Aircraft?

Aircraft can be sprayed on the pad or directly at the gate by up to four vehicles, each manned by one driver and one sprayer. If spraying occurs on the pad, an additional crew member may be assigned to communicate with the flight deck and complete the final inspection before authorizing take-off.

Crews also have top-of-the-line, proprietary technology at their disposal to manage the process smoothly. This includes real-time tracking, 24-hour weather monitoring and constant communication with the ramp control tower and the airline’s Operations Control Center.