Secrets of a sommelier: Andrea Robinson shares tricks of the trade for National Wine Day 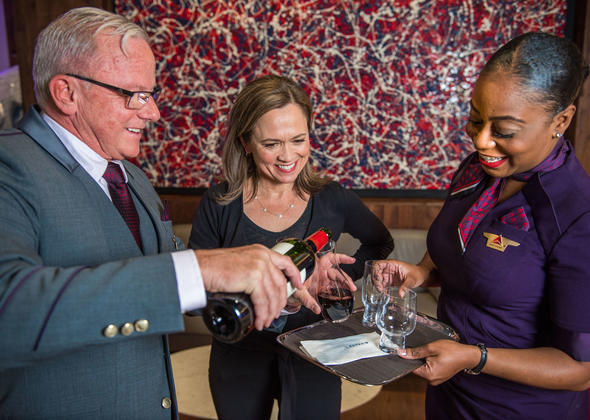 ​​Just in time for National Wine Day this weekend, Master Sommelier Andrea Robinson sat down to dish on all things wine – from favorite pairings and guilty pleasures to the behind-the-scenes work that goes into picking the best pours for Delta's wine program.

The brains behind Delta's wine selections since 2007, Robinson is one of only 33 women worldwide to hold the title of Master Sommelier. She is the first woman ever designated as the Best Sommelier in the U.S. by the Sommelier Society of America and is the winner of three James Beard awards. She is an honors graduate of the French Culinary Institute, and in 2004 was also named Wine and Spirits Professional of The Year by Bon Appétit. 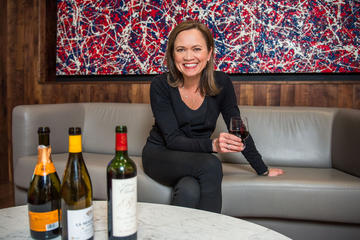 Tell us about how you first became interested in wine. What was your "Aha!" moment?

You know, it's funny. I wanted to be a performer growing up. I always saw myself pursuing acting or something like that. Turns out, that prepared me well for being a sommelier — it's all about telling a story on your feet in real-time. I think the "Aha!" moment for me was a wine tasting class in college. I realized that somewhere along the way, I had fallen in love.

How did you get started? What did the path to becoming a Master Sommelier look like?

I actually went to school for finance and economics, and my first job out of college was at an investment banking firm. But there was a moment when I realized that if I wanted to get serious about this wine thing — I needed to do it, now. So I started working weekends at a wine shop in New York, learning as much as I could. One thing led to another, including a big leap of faith to quit my job, move to Europe and visit every classic winery I could – and well, here we are today!

When did you first get introduced to Delta? What did you think?

I met the Delta team just as the company was emerging from bankruptcy. They were gearing up to launch a new product called "BusinessElite" and were looking for the right partner to help shape their wine program. They were looking for someone with the right credentials, but also the right personality. Someone who could make wine approachable for anyone.

I knew, or strongly suspected, that the notion of wine at altitude could be difficult, but I certainly didn't understand that fully at the beginning. I had a lot to learn, but I was up for the challenge.

Describe your role with Delta today. What does it take to bring Delta's wine program to life?

It's a year-round process and a labor of love. I'm looking out for great wines all year long, and keeping track of candidates that would be a good fit for the program, to be enjoyed both on the ground in Delta Sky Clubs and onboard at 30,000 feet in the air.

There's a lot to consider when selecting wine to be enjoyed at altitude. For one, your senses are dulled, making it more difficult to appreciate the complex scenes and flavors wine has to offer. We have to compensate for that by selecting wines with significant presence on the palate, and expression in the glass that wakes up the taste buds. So as I'm tasting wines throughout the year, I'm doing so both in the air and on the ground. I've found it's absolutely critical to do both.

Every year, I gather my final selections for one, final taste test to determine which offerings are just right for Delta. Last year, that involved evaluating more than 1,500 bottles over the course of one week!​=

How do you equip Delta's flight attendants with the information they need to serve wine at 30,000 feet?

Part of my process involves taking careful tasting notes that Delta's flight attendants can use to describe our various offerings in-flight. We also offer something called the "Sky Sommelier" program, which includes a series of online learning courses where flight attendants can learn how to really bring the wine experience to life for Delta's customers. It's been a big hit – originally, the course was only open to international flight attendant leaders, but by popular demand, it's since expanded to Delta's more than 24,000 flight attendants. 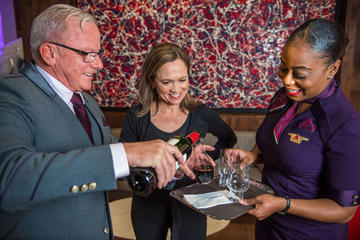 What are your favorite places in the world to travel and taste wine?

There are so many magical wine regions – Tuscany in Italy is so historical, picturesque and welcoming, and the wines are terrific. Champagne, my favorite wine type, is just a 40 minute train ride directly from Charles de Gaulle airport. It's gorgeous and sophisticated. And I'm partial to my home turf of Napa Valley – so close to SFO [San Francisco] and SMF [Sacramento] airports, and a like-no-other hospitality and lifestyle experience.

Are there any common wine myths out there, or secrets only a sommelier would know?

Wine doesn't have to be expensive to be good. That's just not how it works! Wine is a personal preference and different wines fit the bill for different circumstances. It's all about finding what's right for you.

Also, the whole "red with meat, white with fish" adage doesn't always ring true. There's some sound logic there, but it's not a hard and fast rule. I always say to pair with the prep, not the protein. Protein is a blank canvas. If you're preparing a fish dish with lots of tomatoes, garlic, onions and so on — why not pair with a light Italian red?

What about your favorite food/wine combo? Any guilty pairings?

One seasonal pairing I'm really enjoying at the moment is a fresh, basil pesto paired with a Napa Valley cabernet. I never would have imagined it, but after I tried it — it's an unbelievable pairing! My husband and I argue about who discovered it first.

Another one you wouldn't expect is a champagne or sparkling wine paired with basically any fried food. Champagne and fried chicken? Delicious!

What are some upcoming Delta One wine offerings that you're most excited about?

This fall, we'll serve a Barbera red from Italy's Piedmont region. The Barbera grape is soft and juicy, so perfect to wake up your palate in-flight, and delicious with most any dish. We'll also be launching a feature of Jordan Chardonnay from Sonoma's Alexander Valley. It's elegant, rather than big and oaky, so a great food partner, and one of the top-selling wines customers look forward to seeing in fine restaurants. Also, this winter we'll be featuring Brown Estate, the first and only black-owned estate winery in Napa Valley. I took their Betelgeuse Sauvignon Blanc and Chaos Theory red blend in-flight several months ago for a surprise tasting, and customers loved it!