​Veteran airline reporter Scott McCartney of the Wall Street Journal highlighted Tuesday that Delta continues to find ways to improve during weather-driven irregular operations—of which there were many in 2018— further separating it from competitors.

Some Delta competitors pointed to tough weather conditions and other factors to explain lackluster operational performance, while Delta was touted for using these challenges to make strategic improvements to irregular operations preparedness.

Delta Chief Operating Officer Gil West told the Journal that how an airline performs in bad weather is key to its reliability. "Even though our weather's gotten worse, our gap to the other carriers has increased quite a bit," West said.

McCartney noted that "Atlanta, Delta's largest hub, had more than 70 inches of rain in 2018, the second-wettest year on record."

"That reduced cancellations and delays, Mr. West says," McCartney wrote, quoting West: "In one day, we'll save 100 cancellations during a de-icing event in Atlanta."

"Delta says it had 143 days without a single cancellation among its mainline and regional flights, up from 90 no-cancellation days from 2017. In 2018, the airline saw only 55 flights canceled because of maintenance problems. In 2010, it had more than 5,000 maintenance cancellations," McCartney wrote, citing West's numbers.

West said of the Wall Street Journal ranking: “It really does take a team to run an airline, and when we say we have the best people in the business, we really mean it. This recognition is just the latest testament to the best-in-class work of the over 80,000 Delta employees around the world. Without them, this honor wouldn’t be possible.”

As McCartney analyzed how U.S. airlines fared in 2018, he stated simply: "Delta shines." 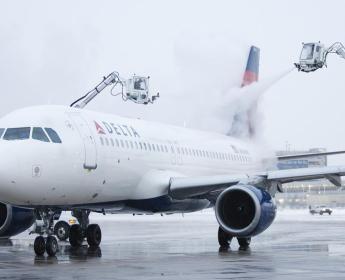